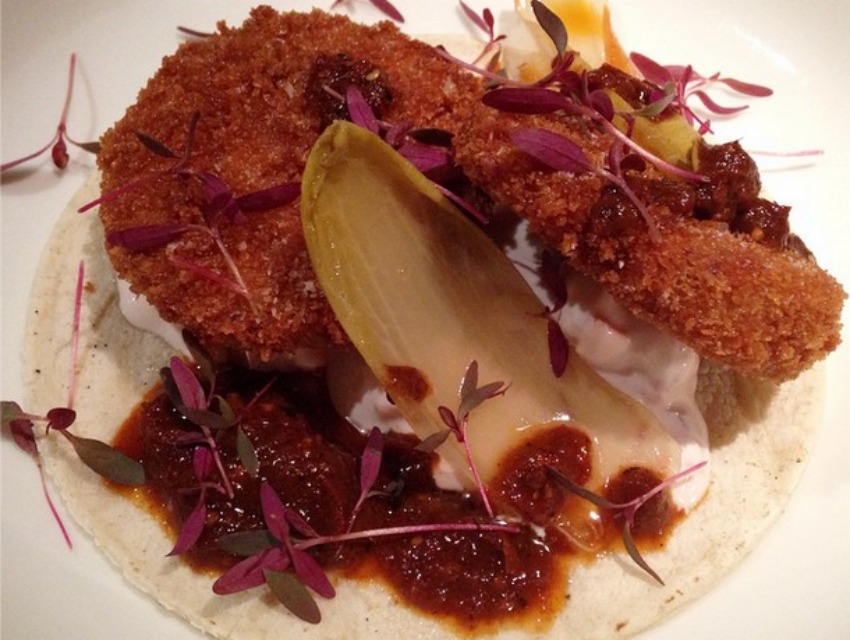 When chef Eduardo Ruiz opened Corazon y Miel just a year and a half ago, tacos were the furthest thing from his mind, as were many of the more conventional dishes from the Mexican kitchen. Since then, Ruiz has firmly established himself as one of the leading chefs of the Alta California movement, a cuisine that has surfaced from L.A. born Latino chefs raised on traditions but versed on the ingredients and aesthetics of California cuisine. With the increasing popularity of tacos in L.A., it only seemed natural that Ruiz would finally put a taco on his menu, a dish that’s synonymous with the City of Angels.

The new fall menu consists of a handful of items including a whole fried fish, which is another Latin-American standard that Ruiz has given a makeover. Now that Corazon y Miel has established itself as a popular neighborhood spot in the city of Bell, an unlikely place for a gastropub, Ruiz has some room to change things up. Tacos are no stranger to Atlantic Ave. with so many street stands that pop up at night. His version, however, is no ordinary street taco.

Ruiz prepares a Mexican-style head cheese from scratch–the kind you’d find in Toluca, the charcuterie capitol of Mexico—breaded and deep fried into discs. The savory pieces of head cheese are nicely balanced by pickled vegetables, sautéed endive, Mexican cream and a smoky chile morita salsa on a corn tortilla. Many chefs are getting into the taco arena with tacos that are based in both traditional and contemporary practices, but few are able to both elevate the taco while preserving the essence of the street food experience.  The head cheese taco condenses a stew of contrasting flavors and textures intended accent the main ingredient, just what you want in a great taco. The new menu additions reflect a change in the season, but it’s always taco season in L.A., especially for a taco this delicious.