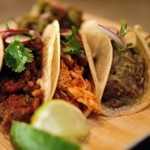 Yes, there are in fact tacos west of the 405… despite the withering food chat threads that decry a deficiency of Mexican food and street food on that side of town. To those west siders who don’t venture east of the Santa Monica freeway, there are plenty of solid Oaxacan restaurants, and there are loncheras (traditional Mexican food trucks) that maybe aren’t the talk of the town, but are beloved by folks in places like Santa Monica, West L.A., and Venice.

But I must also say to east siders: if you’ve never ventured west of the 405 for tacos, you’re missing out. Chef Ray Garcia at FIG in Santa Monica is making some of the most amazing tacos de lengua to be found. No, don’t even tell me about some truck in Highland Park or some nonsense like that. Exceptional tongue is hard to come by in L.A.; for me, it’s either the FIG, Tamales Elena in Watts, or I just don’t get any tongue at all. It’s prom all over again!

Chef Garcia is another one of L.A.’s exceptional pocho (Mexican-American) chefs that can bridge the gap between a classical culinary education and an understanding of how traditional Mexican flavors work. Yes, this man knows how to taco.

He uses quality beef tongue from Vintage Natural Beef and braises it for seven hours in a tomatillo sauce, until it fails into a moist pack of flavorful tongue that folds into the center of the corn tortilla like a cooing baby into a hand knitted blanket.

You have to come to the Sunday brunch (11 a.m. to 2 p.m.) for Chef Garcia’s tacos—they are east side priced at only $3 a piece for fine ingredients executed with gusto. Your wallet won’t feel a thing at these prices for a pair of tacos right next to the Pacific Ocean—what could be more Mexican? Of course, it’s also worth noting that FIG is located inside the Fairmont Hotel; can you say “staycation”?

Who Serves the Best Brunch in L.A.? You Decide