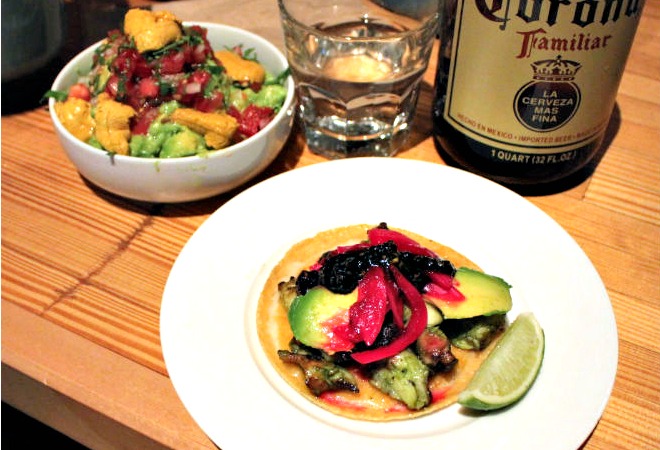 On Cinco de Mayo, chef Walter Manzke’s Petty Cash Taqueria celebrated the Battle of Puebla—well, not really, we just drank tequila and had tacos—and marked the one-year anniversary with a packed crowd of young taco enthusiasts. Petty Cash is inspired by the street food and spirit of Tijuana which was alive and well with refreshing cocktails made with tequila and mezcal, fashioned by Julian Cox, such as the Petty Cash Margarita which can be made with both spirits, 32-ounce Coronas, known as caguamas, or turtles, lots of guacamole (even version with sea urchin and chicharrones called the Bomb.com) and salsa, and of course—tacos.

The only way I thought to celebrate this occasion was with one of the signature tacos that’s been on the Petty Cash menu since day one—the charcoal-grilled octopus taco. Tender, smoky octopus is topped with peanuts, chile de arbol salsa, and slices of avocado on a tasty handmade tortilla, pressed to order from fresh masa made from nixtamal.

Octopus tacos are common on the Baja Peninsula, but there are few places in L.A. where you can get a seafood taco this delicious, aside from the fried fish and shrimp tacos that are found all over town. Petty Cash Taqueria has many tacos of the surf, garden, and turf variety along with market-driven seasonal specials that pop up on the men every so often. The charcoal-grilled octopus taco, though, is required eating, an outstanding taste of Tijuana street food culture here in Los Angeles, the taco capitol of the U.S.