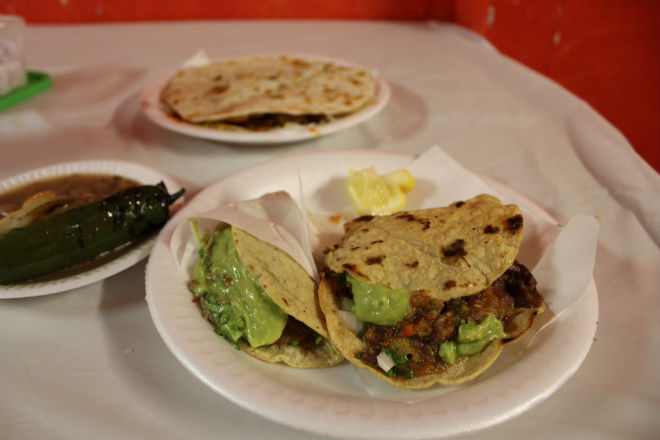 It was just three months ago that I introduced you to the wonders of Tijuana-style carne asada at a no-name stand set up in the parking lot of a South L.A. tire shop. Now, I have come across something even more exciting from just south of the border.

The problem with Tijuana-style stands that feature taqueros from Puebla—a trend that now extends from Los Angeles to Cabo San Lucas—is that they disappear and resurface often, making them tough to follow.  But there is some hope for consistency: Los Angeles has its first bonafide Tijuana taco truck in the recently opened Tacos Los Poblanos, which proudly offers tacos al estilo Tijuana, or Tijuana-style.

The menu items are standard Tijuana–or Baja–street food fare, as grilled by skilled Pueblan transplants: carne asada tacos, quesadillas, mulitas (like a taco sandwich), and flat top-toasted tostadas de carne asada.  There are even tacos arabes, or Arab tacos, which usually consist of spit-roasted pork and chipotle salsa wrapped in a special pita-style tortilla. In this case, they are made using a regular flour tortilla instead—come on guys, who are you trying to kid?

But those tostadas! The tender carne asada is cooked over mesquite charcoal.  Corn tortillas are warmed on the comal, or flat top grill, until they are slightly warped, charred and blackened.  The freshly chopped meat is piled on top, along with cilantro, onions, salsa and guacamole. The tostada’s crunch delivers a stark contrast to the softness of the usual carne asada taco, along with an added smokier flavor from its toasting on the flat top.

It looks like Tijuana-style carne asada is here to stay, and that is a very good thing.