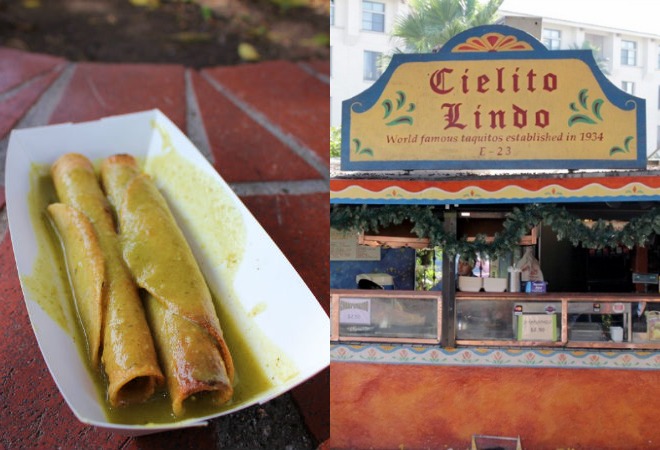 On L.A.’s first street—Olvera St.—in the heart of El Pueblo de Los Angeles, is where one of L.A.’s ultimate obsessions began. That is the tale of the taco, or in this case, the taquito, or little taco.  Author of Taco USA: How Mexican Food Conquered America, Gustavo Arelleno wrote that Cielito Lindo’s founder, Aurora Guerrero, and her daughter Ana Natalia (who also opened Las Anitas in the same plaza) brought their taquitos to Olvera St. and spread their tasty recipe throughout Los Angeles and, says Arelleno, “the modern-day taco took its infant steps towards supremacy.”

We are all very thankful.

Cielito Lindo’s taquitos are simple—lightly seasoned beef is rolled into a fresh corn tortilla and fried until crispy before a generous pour of the famous watery, pale green avocado sauce—arguably the crux of the dish—is ladled on top. The taquito exists for slurping up a sauce that bucks the usual tartness of a tomatillo-based green salsa or the bite of a fresh chile salsa in favor of a sauce that’s mildly piquant, with a balance of heat, saltiness, a touch of avocado and some fat that leaks off of the taco.

It’s a taste that stills commands a line 80 years later that is at the same time a novel tourist attraction and epicure’s curio.  In the current era of L.A.’s burgeoning taco culture, it’s easy to overlook the significance of Cielito Lindo’s taquitos, but remember that “we built this city, we built this city on” ta-qui-tos.