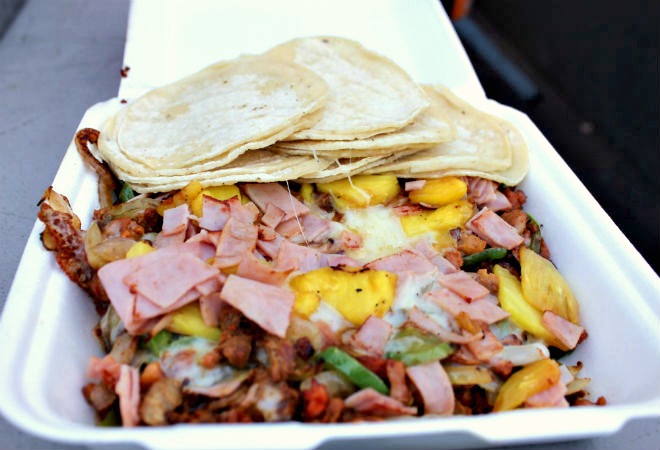 Of all the tacos that rule the night in Mexico City and in the surrounding states to the south, the alambre is the drinker’s fail-safe, designed to mitigate the damage of a late night bender that will undoubtedly require spicy menudo, birria, or a bowl of siete mares (seven seas soup) the next morning. The alambre is a flat-top stir-fry of meats, cheeses, peppers, onions and a variety of other ingredients served on a plate with a pile of corn tortillas for making tacos.

There are usually a number of alambres available at taquerias and you can super-size them for large groups–the guy who does a face plant on the table doesn’t have to pay his share–he will pay in the morning.

Your designated driver should know how to get to Tacos Leo for the authentic Mexican flavors of ham and pineapple–that’s right, the Hawaiian pizza is the unofficial pie of Mexico. The alambre hawaiano marries Leo’s famous al pastor with ham, pineapple from the top of the spit, peppers and browned onions that pack a punch–a Hawaiian punch (doh!).

Like at many of our Oaxacan restaurants, Rincon Oaxaqueño is where you go for an alambre with tasajo, or salted beef, onions, peppers, and melted Oaxacan cheese for scooping up with a tortilla. All that’s needed is couple of spoonfuls of salsa for a tasty taco that’ll stick to your ribs all night long.

Tacos Cuernavaca is the undisputed king of the alambre, offering 3 different combinations from his hometown of Cuernavaca, but the alambre super mixto is the most impressive. Taquero Juan Martinez makes his own pork chorizo that’s fried into a massive pile that includes steak, onions, bell peppers and sharp cheese that’s topped by strips of some of the best pork loin milanesa in L.A. Just tell him how many in your party and he’ll construct a handsome plate that will be the envy of all the other customers.