Home Uncategorized Ending the Year of Ramen at Jinya 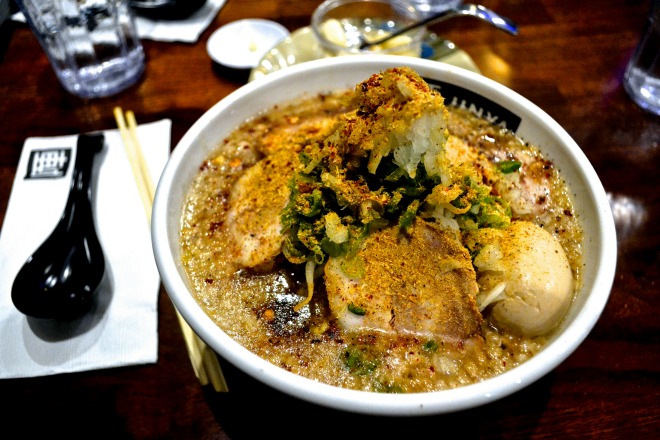 2013 was many things to many people, and depending on who we’re talking about, that thing could’ve been twerking, shutting down the government, or Breaking Bad. This past year was brimming with surprises, not only in pop culture and politics but in the food world too. And whether you loved or hated it, ramen—those chewy, slurpy strands of Japanese noodles—commanded the foodie spotlight for much of the previous 365 days.

From the feverish fanaticism of the Ramen Burger (only rivaled by the Cronut) to the staggering crowds noodle-mobbing the Ramen Yokocho Festival in Torrance, not to mention the highly anticipated opening of Tsujita Annex, ramen was the big bowl on campus.

Finishing off 2013 by polishing off a voluptuous vessel of hearty ramen only seems fitting, which is why I hit the hot ramen spot Jinya in mid-Wilshire for their exclusive Cha Cha Cha tonkotsu ramen.

Most likely “Cha Cha Cha” in the ramen bowl’s name is a play on the many thick discs of marbleized chasu pork that buttress the noodle soup. However, to call this a soup is not exactly accurate—it’s more like an umami ramen stew. The pork bone broth, having simmered for a dozen hours, is thick with collagen and calcium, then pork back fat is introduced to further emulsify the stock. This base soup becomes so dense with lip-smacking fat that a film of the stuff builds up on top.

An extra thick ramen noodle is necessary to hold its own against the rich bone soup. Also, my favorite ajitsuke tamago or seasoned soft boiled egg is served whole (not the common half portion).

To balance out the unctuousness, white and green onion, cabbage, loads of bean sprouts, Korean seasoning powder, toasty garlic chips, and gobs of fresh raw garlic (along with garlic press) bring some civility to the otherwise beastly bowl.

The other smart thing about closing out 2013 with a bodacious bowl of ramen is that it’ll make ringing in 2014 that much less painful. That’s right, ramen is not just a great hang over treatment but, more importantly, a culinary countermeasure. Happy New Year!

The Best Ways to Celebrate New Year’s Eve at Home During a Strange, Strange Year