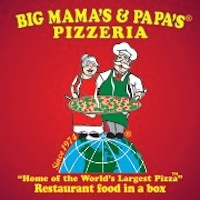 About halfway through this past Sunday’s Oscars ceremony, Ellen Degeneres, the host for the night, decided to order pizza for some of the guests sitting near the stage. Jennifer Lawrence, Julia Roberts, Jared Leto, Harrison Ford, Brad Pitt, Meryl Streep, Kevin Spacey, and a pregnant Kerry Washington all agreed to have a slice.

During the commercial break, Ellen had her people call nearby pizzeria Big Mama’s and Papa’s on Sunset. The only thing Russian delivery guy Edgar knew was that he was going to deliver pizza to “some writers.” When he arrived at the Dolby Theater, he was directed to the front entrance where he met Ellen who had him follow her right onto the stage.

The Los Angeles Times reported that the exposure Big Mama’s & Papa’s received on the Oscars would have cost $1.8 million had it been purchased as an ad in advance. A call to Big Mama’s & Papa’s confirmed that it was a last minute call-in delivery that worked out well for everyone, including the delivery guy.

In the clip above, Ellen invited Edgar onto her daytime show yesterday to give him his tip. And, in an Oprah-style move, Ellen bought pizza for everyone in the audience too.