Home Food & Drink A Wood-Fire Pizza Stand Is Drawing Crowds to a Parking Lot in... 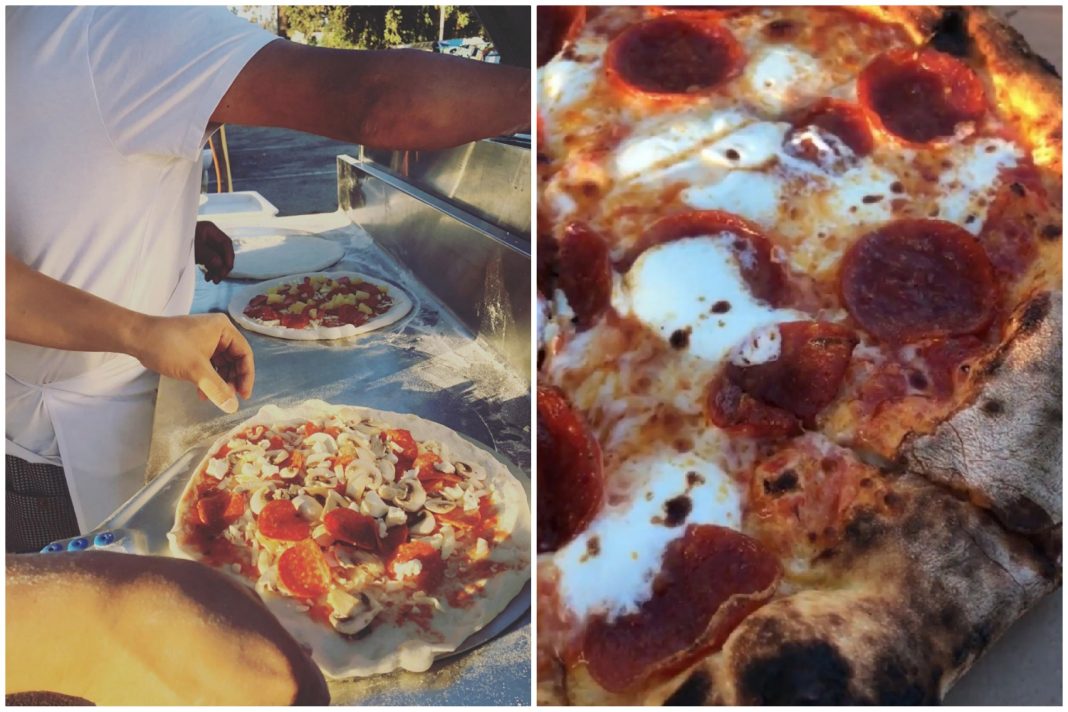 On Sunset Boulevard in Echo Park, between a liquor store and Flores Recycling Center, there’s a parking lot you probably wouldn’t notice if it weren’t for the tent, folding tables and chairs, and the light emanating from a wood-fire oven secured to the bed of a 2005 Toyota Tacoma.

Manning the oven is Elio Lopez, dressed in baggy, pinstriped chef pants, white apron, and black skull cap—the uniform of a line cook, not a Chef’s Table wannabe eager to divulge his life story. He’s 36, though his baby face suggests otherwise. He works calmly, squeezed among his truck, a prep station, a holster for pizza paddles, and a few employees.

L.A. loves a secret, and Elio’s Wood Fire Pizza is the type of place that people were destined to get behind. The court of public opinion has convened, and a pizza oven on the bed of a truck is decidedly charming. The stand quietly got its start back in early summer; one Food Insider video later and suddenly Elio’s has 15,000-plus followers on Instagram. It’s OK to get wrapped up in the makeshift aesthetic of the stand, but the craft behind the pies deserves high praise, too.

Born in Guatemala, Lopez worked in bakeries in Mexico as a teenager, showing an early  knack for dough. He spent upward of 13 years in L.A. kitchens, largely manning pizza ovens. “Everybody said, ‘You’re very good at pizza,’” he tells me. Perhaps he got pigeonholed, but he used the time to develop his craft, slipping headfirst into his calling.

The oven comes from Florida by way of Italy, a modest, wood-burning igloo that can fit three to four pizzas at a time. It burns at 750 degrees and produces a charred but still doughy crust. As for the space, Lopez says he simply asked the folks at Flores Recycling if he could use their lot. Affordability and simplicity are key to Elio’s business model. Case in point: A cheese pizza is 10 bucks. From there, toppings are a dollar (burrata cheese is $2), and pizzas are totally customizable based on the ingredients Lopez has on the prep line, from sliced jalapeños to pineapple chunks. “If people tell me I need to work on my ingredients, I listen,” he says. “I want it to be as perfect as possible.”

Lopez certainly isn’t reinventing pizza, just proving that, deep down, people are open to good food without frills. The tent, the transportable chairs and tables, the truck—Elio’s could be your family’s backyard.

For the time being, you’ll find Lopez next to that Tacoma seven days a week, standing in front of the oven like he doesn’t trust his own success. I tell him he needs a day off. He laughs and asks, “Who’s going to make the pizza?”

RELATED: Culver City Has a New Pizza Spot in an Unexpected Place