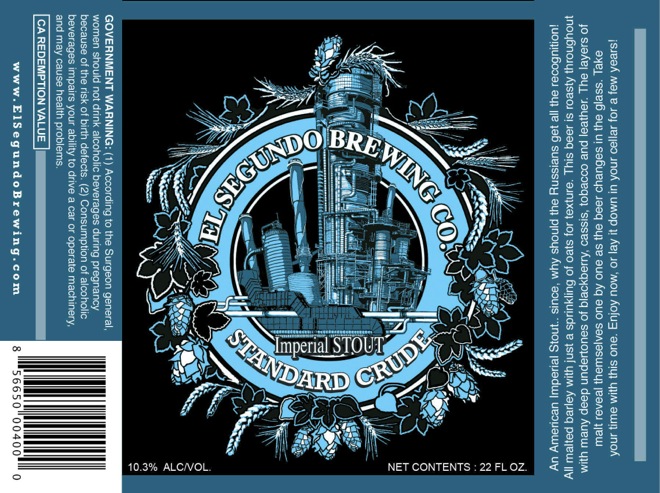 El Segundo Brewing Company has come a long way since opening its doors less than two years ago. A recent Facebook post from ESBC “partner/chief rainmaker” Tom Kelley (yes, that’s what’s printed on his business cards) hinted that the brewery’s first bottled beers are on their way. In the name of research, I felt compelled to stop by and check it out for myself. Turns out brewmaster Rob Croxall and the aforementioned chief rainmaker have indeed already bottled their Standard Crude—a decidedly dark, roasty imperial stout weighing in at an impressive 10.3% alcohol by volume—and are just awaiting government approvals on the label design they submitted. Also on the list for bottles is their White Dog IPA, a hop-forward India pale ale that’s smoothed out a touch by switching out half of the malted barley with white wheat.

But don’t expect to see a bottling line when you roll up to their Main St. tap room. They’re using the services of a mobile bottling service for now. “It’s great,” says Croxall. “The guy just wheels his truck in, hooks up the equipment, and before we knew it, we had bottles of our beer.”

Previously available only on tap and in to-go “growler” fills, the 22 oz. “bombers” should be available at the brewery and select retail locations around town beginning in mid-to-late January.

In other news, production continues to grow, and the two-man team plans to bring in additional fermentation tanks to meet demand. “We’re doubling capacity… again,” smiles Kelley. Two 60-barrel fermenters (1 barrel = 31 gallons) and a 60-barrel “brite tank” (used for cooling and carbonating finished beer before kegging and bottling) will be joining their existing quartet of 30-barrel fermenters.