Home Uncategorized Eight Other Restaurants For the Meat Obsessed that You Can Actually Get... 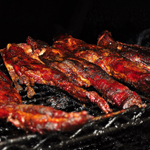 You just drained your supply of 1811 Chateau d’Yquem, and you don’t know anyone who knows anyone who’s in the good graces of Kaz Oyama, owner of the famed “secret beef restaurant” Totorako, profiled in our March issue. We hate to break it to you, but it sounds like you might need to get your meat fix somewhere else. Luckily, despite its being one of the bastions of vegetarianism, Los Angeles boasts a bevy of places where carnivores dine like kings.