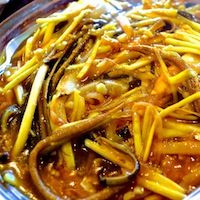 A heaping plate of eel noodle can, at first glance, appear unsettling. Resembling the slithering locks of Medusa the Gorgon, they’re a pile of serpentine protein in disarray. But in Taiwan, mass quantities of this stuff are slurped up at night markets and posh seafood restaurants all over the island nation.

Originating from Tainan (the fifth most populous city in Taiwan), eel noodle is most often comprised of thick, chewy, egg noodles with young yellow or finless eels, and a brown sauce or viscous soup. Sometimes spotted on menus as san-yu yi mien, eel noodle usually comes in one of two flavors, depending on where you eat them: a sweet and sour preparation hailing from Tainan or a more savory Shanghai variation.

Swimming with scores of miniature eel—about 1/4-inch thick and three inches long—sometimes it’s hard to tell where the eels begin and the egg noodles end. But thanks to the eel’s fatty flesh and slippery skin, there is an appealing unctuousness that plays well with the heavy sauce, which also conveniently helps to mask any of this bottom dweller’s occasionally brackish taste.

Back in Taiwan, eel noodle is almost as ubiquitous as beef noodle soup, but not so stateside. Even our own 626 Night Market doesn’t host a booth offering the slick, snaky strands, though there are a handful of San Gabriel Valley restaurants—like Southern Mini Town and Tasty Village—and at least one Rowland Heights noodle house that whip up eel noodle in the Shanghai style.

Cooking up a large but pricey plate of eel noodle ($15.95) that is close to Tainan style is Cafe Fusion in Arcadia. I say close since the traditional egg noodle is subbed with a flat, broad wheat noodle that just doesn’t thrill me quite as much. Still, they work well with small spears of tender bamboo shoots that form the base for the eels and the syrupy sweet and sour sauce. It’s likely an acquired taste for most, but then again so is that other Taiwanese cuisine favorite: stinky tofu.