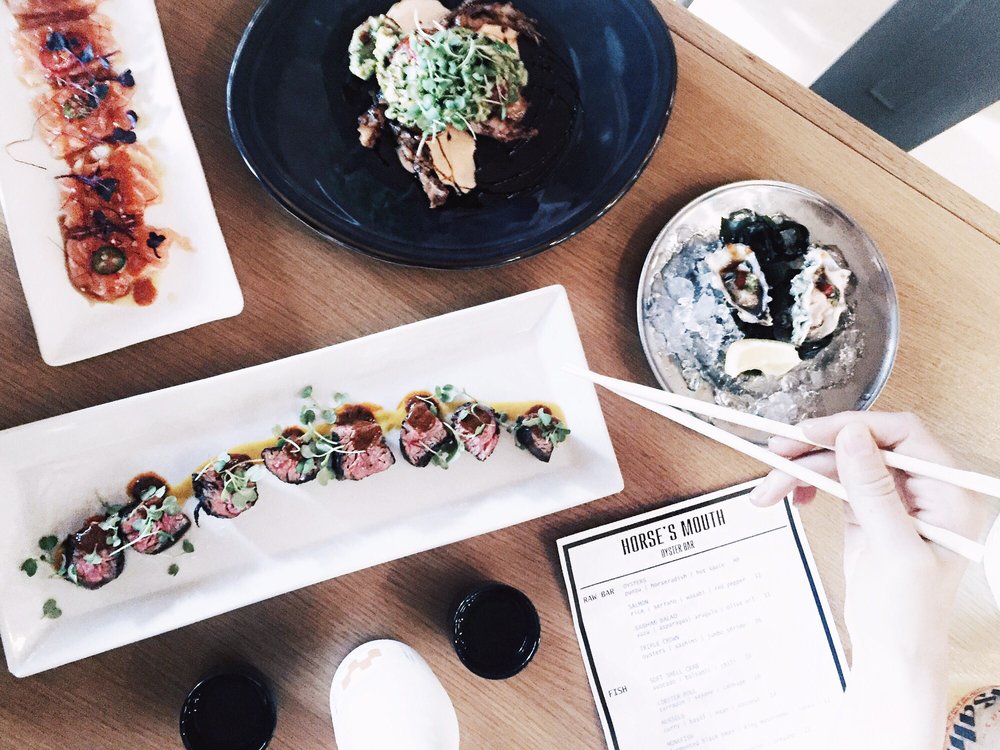 Each Friday, the Digest surveys the burgeoning L.A. restaurant scene and compiles a list of the newest, most hyped and heralded restaurants in town this instant. Whether big or small, near or far, these are the restaurants that have people talking—us among them. Snag a seat at these hotspots while you still can.

1. Horse’s Mouth
There’s a cool-kid restaurant popularity contest going on in K-Town, and your mouth-hole is encouraged to vote. Here’s Looking at You opened to a ton of well-deserved fanfare last month, but rolling in at the same time—almost completely under-the-radar—was Horse’s Mouth. It has a short menu centered around creative raw seafood and oyster bar-ish dishes like sashimis. For what it’s worth, Horse’s Mouth is beating HLAY 4.5 stars to 4 stars on Yelp! at time of publishing. 528 S. Western Ave, Koreatown, 213-568-3700 or horsesmouthla.com

2. Suburbia
It’s a weird restaurant concept that’s somehow less weird than all other restaurant concepts. Suburbia is chef-staurateur Tin Vuong’s newest venture after Little Sister, Abigaile, Steak & Whisky, and another Little Sister location, and it’s essentially combining the greatest hits of all his previous spots. It’s like the cover band of restaurants, except it plays a bunch of songs from a bunch of different bands just as well as the original bands could do them. The 50-ish item menu goes all around the globe from poke, to Vietnamese beef carpaccio, to fried green tomatoes, to Lebanese ground lamb. 247 Avenida Del Norte, Redondo Beach, 424-398-0237 or eatsuburbia.com

3. Howlin Ray’s
It’s one of the hottest restaurants in town. Get it? Hottest? Like, hottest. It’s a double-meaning, because they serve Nashville hot chicken, but they’re also massively popular. Ahhhh, you guys get it. Dad jokes aside, chef Johnny Ray Zone’s chicken shack has had massive lines snaking throughout Chinatown’s Far East Plaza ever since the doors opened. The wait has only gotten longer ever after Jonathan Gold’s rave L.A. Times review. 727 N. Broadway #128, Chinatown, 213-935-8399 or howlinrays.com

4. Salazar
It’s been almost a year since we first noticed a little taco spot opening in a former auto body shop on the edge of up-and-coming Frogtown. It’s finally here, and so far the only thing up in the air is if it’s more of a destination for its Sonoran-style grilled meats, its wines, craft beers, and cocktails made for patio pounding, or its palm-shaded terrace. The man behind the wood-fire grill is none other than Mexicali co-owner Esdras Ochoa. Co-owner Billy Silverman was hoping to capture a bit of that Austin outdoor vibe, and threw in plenty of loungey seating and fire pits to encourage lingering. 2490 Fletcher Dr., Frogtown

5. Here’s Looking At You
Koreatown just scored its most ambitious (and certainly buzziest) restaurant since the minute vegetable-fest known as Le Comptoir. The food from chef Jonathan Whitener and Lien Ta is decidedly not Korean. In fact, the menu goes from nectarines with Syrian feta, pigweed, and sumac, to cured salmon with aleppo, raspberry, and chicharron, to smoked Cornish hen with apple and, er, blood. (Hey, it’s on the menu.) Cocktails like the Tropical Medicine with roasted pineapple infused Johnnie Walker should help you go with the flow. 3901 W. 6th St., Koreatown, 213-568-3573 or hereslookingatyoula.com

6. Nighthawk Breakfast Bar
The place that bent the rules of time and space and told us it’s okay to eat brunch at midnight (not that we needed permission, but it’s nice to have someone in your corner) is back in a new location. Restaurateur Jeremy Fall’s Nighthawk Breakfast Bar made the shift from Hollywood to Venice and people—both drunk and sober—are going crazy all over again for French fries Benedict and towers of bacon. And cereal milk cocktails. Because nostalgia, corn syrup, and dairy were the only things missing from your cup of liquor. 417 Washington Boulevard, Venice, nighthawkrestaurants.com

7. 71 Above
Almost every restaurant in L.A. suffers from the same problem: They’re all too low to the ground. Situated in the U.S. Bank Tower 950 feet above the streets of Downtown, fine-dining newcomer 71 Above doesn’t have to worry about that. Chef Vartan Abgaryan—formerly of Cliff’s Edge—is heading up the kitchen and churning a three-course prix-fixe menu ($70) that might start on oysters with uni and caviar and finish on a prime rib-eye flavored with black garlic miso. From the massive banquettes to the gold-decked decor, everything about this place screams “IMPRESSIVE.” Sorry about the all-caps, but this is an all-caps kind of place. 633 W. 5th Street, Downtown, 213-712-2683 or 71above.com

8. Gwen
Everyone’s favorite Australian celebu-stud, Curtis Stone, and his brother Luke have finally opened Gwen, the meaty sibling to Stone’s Beverly Hills produce shrine, Maude. Those lucky enough to secure a reservation via Tock ($190 a pair) can experience a set tasting menu that kicks off with rotating housemade charcuterie, seasonal salads, and a fresh pasta preparation, and winds up with what they’re calling the “main event,” which is usually some massive whole animal (lamb, perchance?) broken down into all sorts of preparations. If you feel like getting extra fancy you can supplement the meal with a giant dry-aged rib eye or hunk of Blackmore wagyu. Because this is Hollywood. 6600 W. Sunset Blvd., Hollywood, 323-946-7512, gwenla.com

9. Kettle Black
Well that came out of nowhere. This very cool, very design-y rustic Italian spot is officially open for dinner in Silver Lake slinging pizzas, pastas, and some of-the-moment vegetable dishes like roasted cauliflower with bagna cauda. And if you haven’t heard of the chef, Sydney Hunter III, now is the time to get yourself acquainted. He was most recently at Superba Snack Bar, and before that he was the chef de cuisine at Petit Trois, and before that he hands his hands all over big restaurants like Bastide and Riva. This guy can cook. Oh, there’s also a happy hour (and late-night happy hour) where you can get a meatball sub for $7 or a margherita pizza with a beer or glass of wine for $14. Which is fantastic news. 3705 W Sunset Blvd., Silver Lake, 323-641-3705 or kettleblackla.com

10. Erven
After the sudden closing of K-Town’s Saint Martha and a brief stint at Fundamental, this will be check Nick Erven’s third restaurant in the past year. But neither of those spots had his name on the signage, so let’s hope this one is a bit more permanent. Erven is serving an all-day, all-plant-based menu, which means inventive sandwiches like fried cauliflower with pickled raisins at lunch, and dinner—when it finally kicksoff—will feature some more globally inspired veggie dishes like green tomato and heart of palm pozole. It’s about damn time a restaurant not called Crossroads started doing some ambitious plant-based food. 514-516 Santa Monica Blvd., Santa Monica, 310-260-2255 or ervenrestaurant.com

11. Lost at Sea
Ohhhhhh man—we got a burgeoning restaurant empire on our hands. Santos Uy, who’s also involved in Mignon, Papilles, Cento Pasta Bar, and Rice Bar (a Bon Appetit top 50 Best New Restaurant in America), just opened this neighborhood seafood spot in Pasadena. He took chef Tim Carey with him from Papilles, and he’ll showing off the same kind of precision, technique, and soul that made the Hollywood Hills bistro so popular. Lost at Sea goes from classic to mind-bendingly creative, from a lobster and corn velouté to octopus with mole and strawberries. 57 E. Holly St., Pasadena, 626-385-7644 or lostatseapas.com