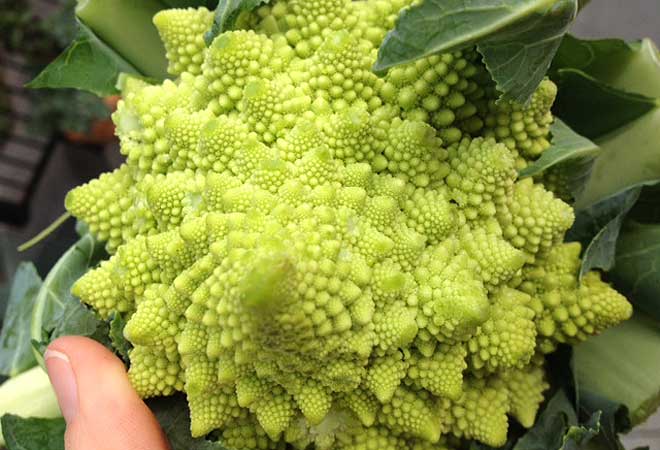 “I’ll take the romanesco,” said the cheffy type standing in front of me this morning at the Rutiz Family Farm stand at the Santa Monica Farmers’ Market.

“All of it?” the farmer asked.

I had to make my move, and fast. I grabbed two small heads of cauliflower’s spiraling geometric cousin and thrust them at the farmer. “Five bucks,” he said. Phew—that was close.

Romanesco, also known as Roman broccoli—or “broccoflower” by the same kind of people who fuse celebrity couple names—has been popular with local chefs for decades, Italians for centuries, and home cooks the last few years. The flavor is sweet—slightly less nutty than cauliflower and less vegetal than broccoli—and the dense florets hold up to longer cooking methods. It also looks a bit like that poster you had on your wall in high school that you totally didn’t smoke pot in front of. The logarithmically repeating buds are one of the rare examples of a fractal in nature. For those of us who skipped that class, that means it looks trippy.

At its peak right now, Romanesco can be roasted to bring out its caramelized sweetness, fried to yield crispy veggie nuggets with serious fast-food appeal, or—as we sampled recently at the West Hollywood newcomer Gorge—pickled. What to do with it then? Toss roasted bits with whole-wheat pasta, pecorino, red pepper flakes, and olive oil for a healthy weeknight dinner, or throw raw or pickled chunks in a wintery salad of mustard greens, baby kales, and radishes. That is, if the chefs don’t snag all of it first.