Home Uncategorized Eat Like a Brazilian for the World Cup Finals 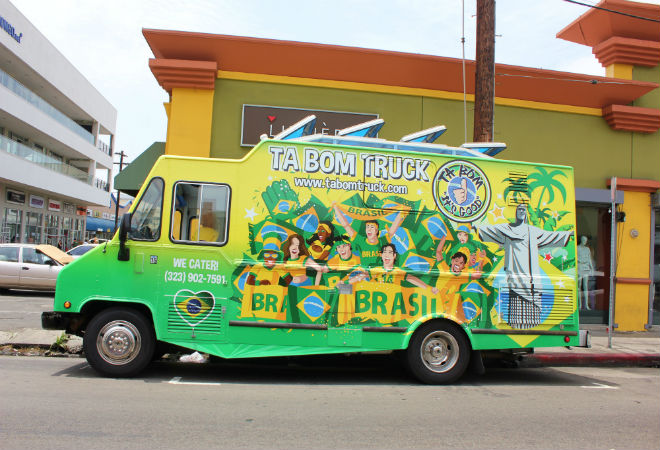 It’s the final week of the 2014 FIFA World Cup in Brazil, with the month-long tournament wrapoing up on July 13 in what will surely be a dramatic championship match. This World Cup has been the most popular in the U.S. to date, with restaurants and bars all over Los Angeles filling up with newcomers to the most popular sport on the planet and learning about the wide world of Brazilian cuisine.

Since Brazil’s team is still in the running, there’s still time to catch a game at the several Brazilian restaurants and get to know this up and coming South American cuisine through it’s delicious bar bites and regional plates, while celebratory drum lines and samba troupes thunder on after each goal scored by the World Cup hosts.

Bella Vista Brazilian Gourmet Pizza
L.A.’s only rodizio de pizza, or rotating pizza service, is the best place to watch Brazilian World Cup games with a lively crowd in the center of Culver City’s Brazilian Mall.  Slices of chicken with catupiry (cheese) and baiana (malagueta peppers, calabreza sausage, mozzarella and onions) pizza are devoured as quickly as they’re delivered. Brazilian culture dictates that it’s okay to put ketchup on your pizza, because, when in the Brazilian Mall…

Cantinho Brasileiro
Not only does this supermarket take-out spot have delicious coxinhas—if you pay attention to their Facebook page, you’ll catch them when they serve a Bahia-style moqueca de peixe com camarao, or fish and shrimp stew cooked with coconut milk and dendê oil.

Panelas Brazilian Cuisine
Hidden in a residential neighborhood, this Brazilian lanchonete has excellent empadões (pot pies) and a daily prato feito ( plate of the day, literally “made plate”) to keep you coming back for more. On Saturdays, you can get what’s currently the best feijoada completa in Los Angeles with mouthwatering beans and salt cured pork cuts, beef jerky, and sausages accompanied by farofa (toasted cassava flour), greens, and rice.

Ta Bom Truck
After a nearly 6 month hiatus, one of L.A.’s favorites food trucks has returned with a new ride, a colorful new wrap, a flat screen to watch World Cup games, and a few new items on the menu. Think of this big green and yellow machine as your Brazilian lanchonete on wheels–try their new pastel napolitano filed with cheese, seasoning, and cherry tomatoes for a taste of the savory streets of Sao Paulo.