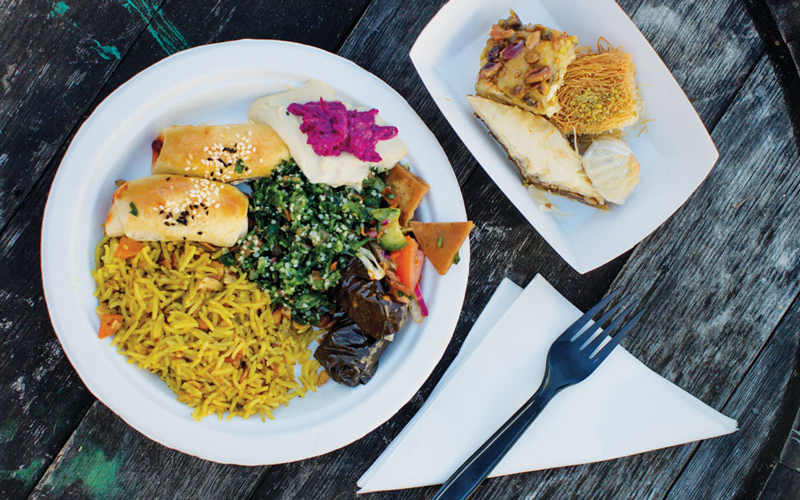 While preparing the New Arrival Supper Club’s first meal, 36-year-old Najwa didn’t sleep for two nights. Instead she and her husband disappeared into their apartment kitchen after putting their three kids to bed, whipping hummus and hand forming enough football-shaped kibbe to feed 42 strangers. The effort was worth it. The money raised from the $75-per-person event was used to purchase necessities for the family, refugees who had arrived in L.A. from the Syrian city of Homs six months ago.

Since that first February dinner in Atwater Village, the New Arrival Supper Club has hosted a monthly series of philanthropic feasts, including one at Glassell Park’s Verdugo Bar, where two refugee families served beef kuba and baba ghanouj to sold-out crowds. The woman behind it all is Miry Whitehill, founder of Miry’s List, a nonprofit Facebook group that crowdsources supplies for refugee families.

“I have no background in this,” says Whitehill. The Eagle Rock neighborhood council member and self-proclaimed rogue fund-raiser worked in digital marketing before taking a break to raise her two kids. Last year one of Whitehill’s friends told her that Najwa’s family needed baby supplies. When Whitehill came by to deliver diapers, she found they needed much more.

“They didn’t have a crib mattress,” she says. “Their baby had been sleeping for three weeks in a basket. I thought, ‘What the hell is up with this situation?’ ” She went home, got a spare mattress from her garage, and returned to Najwa’s apartment to see what else the family could use. She put the list on Facebook and asked for help.

The response was immediate. Within two days Whitehill had a truckload of stuff. Since then, she has done the same for more than 50 refugee families, streamlining the process to allow folks to ship supplies directly through Amazon Prime. The refugees’ ultimate goal, though, is self-sufficiency, and having experienced firsthand many of the families’ culinary skills, Whitehill had a hunch that their cooking could be a source of income. Lemon Poppy Bakery owner and Miry’s List follower Katie Kildow reached out with the idea of establishing a roving supper club, and New Arrival was born.

RELATED: Refugees Are Behind This Inspiring New L.A. Supper Club

The popular events have led to catering requests, and there are plans for a refugee-staffed food truck, a cookbook, and maybe even a restaurant. “We have found this way for immediate work for brand-new refugees. They don’t have to speak English,” says Whitehill. “It’s this entire revenue stream, and it’s all based on food. Food is the ultimate connector.”

New Arrival Supper Club’s next event is a picnic on May 20th in El Cajon from 12 to 2 p.m. For tickets, email Katie at [email protected].