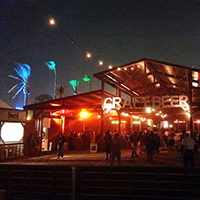 Living in Los Angeles, it’s easy to get used to eating and drinking well. But when we step outside our comfort zone, to a sleepy little town or a sporting event or a music festival, we have to begrudgingly adapt to the available comestibles, eating out of necessity rather than Instagrammable enjoyment. But at this year’s Coachella, we didn’t have to make any such concessions. The organizers upped the food game by hiring Nic Adler (Vegan Beer Fest, The Roxy) to elevate the fest offerings. THIS is what you went on the Coachella diet for: to stuff yourself silly.

There was craft beer, a hand-roll counter, cocktails imported from downtown L.A., yurts featuring Artisanal LA-curated goodies, and a schmancy white-tablecloth dinner by Outstanding in the Field. Not even the vegans were overlooked. Suffice it to say, if you were willing to spend a little more than usual, you didn’t have to just make due. (Full disclosure: Nic hired me to consult on the picks.)

Even though the first weekend of Coachella 2014 is already filed, you still have this weekend to look forward to. Behold, my favorite eats and drinks from last week.*

1) Anything from the Craft Beer Barn
The taps were curated by Tony Yanow of Tony’s Darts Away and Mohawk Bend, and the restaurants included those two as well as Beer Belly. Unsurprisingly this was my second- favorite spot to hang in all of Coachella, right after the VIP Rose Garden. We took shelter from the oppressive sun and Saturday’s sandstorms to enjoy ambrosia like Port Brewing Mongo and AleSmith Speedway Stout ($10 each). Here, everyday favorites were on tap along with some rarities.

2) Honeycut Alcoholic Strawberry Cream Soda
213 Nightlife was out in full force in the VIP Rose Garden, serving up cocktails from Cana Rum Bar, Seven Grand, Las Perlas, and Honeycut made by the 213 bartenders, rather than the festival’s catering company. My personal favorite was Honeycut’s strawberry cream soda. Not as sweet as it sounds, and best enjoyed while leaning against a tree taking in the rose-scented breeze and the music from the nearby Sahara tent. The cocktails were $14, just three bucks more than their regular price at the bars.

3) Salt & Straw Stumptown coffee and bourbon ice cream
How badly did I want this ice cream? Even in the midst of Saturday night’s chilly, 60-degree winds, I ordered myself a scoop, then ran for cover where I could enjoy it without the grit from the gusts getting into it. The ice cream was creamy and faintly tasted of my two favorite libations. It’s probably even better during the hottest part of the day.

4) Night + Market Song vegan pad thai
Even though this dish was simple, it really hit the spot at night, especially when paired with the goodness of craft beer offerings from the nearby beer barn. After Saturday, however, the eatery was moved to the VIP area near the main Coachella stage, which makes perfect sense.

5) Baco Mercat caramelized cauliflower
In all honesty, I was thinking about Mohawk Bend’s buffalo-style cauliflower when I ordered this dish, but was not disappointed.It was tender, savory, and flavorful. The perfect complement to Josef Centeno’s veggie wrap.

For the best eating/drinking experience, get a chair like this so you’re not SOL when all the benches are taken, grab snacks from the nearby yurts to enjoy with your craft brews in the beer barn (you can bring food into the craft beer area, but can’t take the libation out), and take cover from one of the many shade-giving structures. And don’t forget your hand sanitizer.

*Note: I’m a vegetarian, so the Beer Belly grilled cheese, bacon, & maple sandwich isn’t on my list, but it was very much talked about.