Home Uncategorized Eagle Rock Brewery Turns 3, and There Was Much Rejoicing 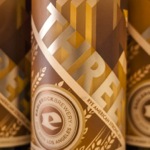 (Sniff sniff) They grow up so fast! Hard to believe that Eagle Rock Brewery is turning three years old already, but it’s true. The award-winning L.A. craft brewery will be holding its par-tay at Verdugo Bar this Saturday from 12 p.m. to 4 p.m., with over 20 of their beers on tap, including one of the very first tastes of their 3rd anniversary beer, an American strong ale with rye called Three. Fifteen bucks gets you admission, two drinks, and a commemorative glass. For grub, Mandoline Grill will be outside slinging their delectable banh mi.

If you can’t wait that long, you can head to Beer Belly, the popular Koreatown craft beer destination that was named one of our Best New Bars of 2012. Eagle Rock Brewery will have 12 beers on tap there tonight after 5 p.m. (including Threes), kicking off Beer Belly’s monthly brewery focus series called “One Night Stand.”