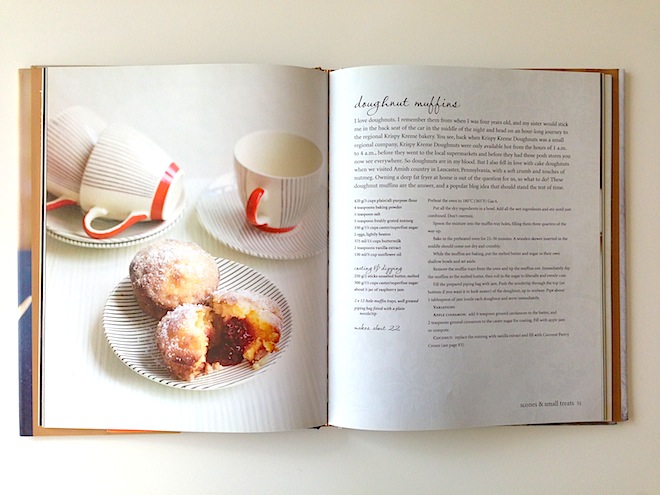 Sometimes it feels like there might not be anything to talk about if we didn’t have donuts and their related spawn. Today’s case in point: The Duffin. As it sounds, this is a donut-muffin hybrid in which two American breakfast pastries have merged into one. Where did it come from? And why is it suddenly news?

Bea Vo, the owner of several London-based locations of the bakery Bea’s of Bloomsbury, has been selling Duffins since at least 2009. A recipe for the creation can be found in her cookbook, Tea with Bea, published in 2011. Vo’s words above the recipe in her book clearly state that she didn’t invent the product; it’s a recipe that she adapted. Muffin donuts have been making the rounds on recipe blogs as least as far back as 2005. (Here’s one from 2008 on the blog Baking Bites.) Essentially, you make a moist, buttery vanilla muffin batter, bake it, and then dip the still-warm cake into melted butter and coat it in granulated sugar. It mimics the taste of a cake donut—without having to heat up a vat of oil. (I’m giving L.A. bakers and donut shops a full 48 hours to get this thing on their shelves.)

Fast forward to last week, when Starbucks UK grandly introduced The Duffin, a creation it claims to have invented, and is attempting to trademark. Whoops! Regular patrons of Bea’s of Bloomsbury quickly informed the pastry chef that her product had been “stolen.” Here’s what she said:

“I was oblivious to the whole thing until last Friday when I saw some random tweets about it, something like, “uh, NO Bea made the duffin first.” They alerted me to the British Baker press release, which was a bit disconcerting, but stuff like that happens everyday. People claim to invent things all the time. But even I admit I didn’t invent the doughnut muffin in my book; I say it was a popular blog idea. However my take on it is my own—I wanted the crusty feel and airy crumb of a sour cream doughnut, the nutmeg scent of a cake doughnut, and the jamminess of a British jam doughnut. That’s how I played with it. We debuted it in the shops, it was popular and I put it in my cookbook. In late 2011, customers began calling them Duffins, so I started calling them Duffins.

So, at first, Vo thought, “Imitation is the sincerest form of flattery,” and went along with her day. Until Starbucks posted its invention story on its blog.

“When I read the Starbucks blog, and how their “original” duffin contained buttermilk, raspberry jam, and nutmeg… I just tried to remind myself that corporations are like this. It’s annoying and disappointing but what can you do? I’m a chef. That flavour profile is unique. For them to claim that they never heard of me after an extensive online search—it was obvious that the PR department did not speak to the development team. I think they could have handled the whole thing with more finesse.

But then, the uh-oh moment.

“Then I find out that Rich Products—the super large bakery product manufacturer—had trademarked the name “duffin.” That’s when I got scared. I didn’t want to have to become a spokesperson or defend my product, but I also didn’t want to lose one of our best sellers. I had to say something. I sent out a couple of tweets to let customers know what happened. As our duffins have been featured in lots of publications (and consumed and photographed by so many of our customers) the outpouring of support was immense.
“First on the scene was Eater. After they published a post on the Duffin, that’s when #duffingate started. And then it just snowballed.”

Vo has since been interviewed by the Today Show, USA Today, The Guardian, and countless other major outlets on both sides of the pond. She’s received the backing of our nation’s most powerful restaurant critic, The New York Times’ Pete Wells, who continues to retweet Bea’s tweets.

Starbucks says its muffin-donut hybrid was “inspired by our muffins.” Funny, for me, Starbucks muffins only inspire regret and despair.

And meanwhile, Bea Vo, the 5’3″ pastry chef who once worked for Nobu and Ottolenghi, is just trying to run a few small bakeries, fix her broken dough mixer, and figure out why the cost of cocoa powder has skyrocketed.

Come on Starbucks UK, back down already. Let a small bakery have their duffin and sell it too.

[Full disclosure: Bea Vo is a close friend of this here humble reporter.]