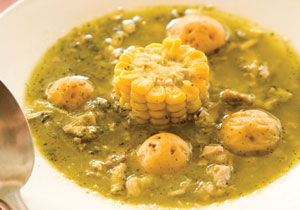 In L.A., Colombian food is all about criollo dishes—resourceful creations that united the kitchens of the Old and New Worlds at the turn of the 16th century. The Spanish brought pigs and cattle with them to South America but had to make do with the local Colombian produce. Green plantains went into their meaty stews and soups. Yucca supplanted wheat in many baked goods. Arepas, simple cornmeal patties, became the national bread. Today the fruits from the country’s tropical lowlands flavor the icy blended drinks served at these criollo spots around town.

La Fonda Antioqueña | East Hollywood
Photos of L.A. glitterati posing with the restaurant’s owner cover the walls of this 26-year-old institution, which recently settled into new Spanish colonial-style digs. Huge bowls of steamy soups are crowded with beef chunks or bone-in chicken and vegetables. The impressive chicken milanesa has tempura-light breading and could satisfy any hungry campesino. Bacchanalian servings of grilled meats and their accompanying sides fill the table, but the tab is just slightly higher than for your average burger. » 5125 Melrose Ave., L.A., 323-957-5164.

Cafe Colombia | Burbank
This kitchen whips up rustic food with plenty of refinements for sophisticated Bogotanos. Ajiaco santa-fereño, a long-simmered chicken soup flavored with guascas, a grassy herb, arrives surrounded by small cups holding garnishes like cultured cream, capers, and sliced avocado. The star of the menu, a tostada-like plato de patacón, is a garlic-infused disk of smashed green plantain double fried until crispy, then topped with grilled steak, chicken chunks, or chicharrón and served with a cabbage salad. » 222 S. Glenoaks Blvd., Burbank, 818-558-3985.