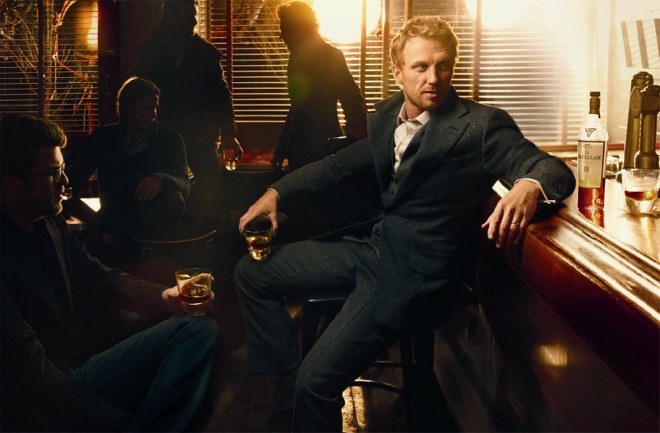 Actor Kevin McKidd, who plays sexy ginger Dr. Owen Hunt on TV show Grey’s Anatomy, is living the Scotch lover’s dream. When he was 17, growing up in Scotland, he worked at the Macallan distillery in Craigellachie, sweeping floors. Now, his face is on four different limited-edition bottles of Macallan single cask scotch. He modeled for the Scotch whisky maker’s third installment of the Masters of Photography series, posing for renowned photographer Annie Leibovitz.

Macallan and McKidd promoted the series’ launch last month with a bar hop around L.A., touting the high-end bars on the tour—10 Pound, Bar Marmont, and Roger Room—as places the actor frequents. But after getting a chance to chat with the man at the end of the hop, I come to find out that he’s really a down-to-earth whisky and beer drinker who prefers Chateau Marmont to clubby Bar Marmont and that he had never been to Roger Room before, but thought it was “a cool place to drink.”

Here are a few of the places where McKidd, based out of Studio City, actually likes to imbibe, in case you want to “accidentally” run into him:

Black Market Liquor Bar (Studio City): “It is local to where I live and it has great appetizers, a cool beer list and a chill atmosphere. I always experiment with beers there.”

The Pikey (Hollywood): “It is in Hollywood but feels like a nice mix of old British pub with West Hollywood cool. Again, it has a good beer selection and decent whiskey choices.”

Little Dom’s (Los Feliz): “It is near the studio where we shoot Grey’s Anatomy at in Los Feliz. It has a great menu. I love the interior. I had my birthday bash there and they treated us very nicely.”

Timmy Nolan’s Tavern, where McKidd occasionally plays in an Irish band (Toluca Lake): “The band has no name. It is a folk music ‘session’ so whatever musicians are in town rock up and get involved. It’s set up by my buddies Dan Conroy (singer/bodhrán player) and Pat Darcy (uilleann pipes). There are amazing fiddle, box, tin whistle, guitar, bouzouki, and other traditional instrumentalists giving for the sake of giving every Tuesday night from 8 to 11 p.m. I am allowed to sit in and accompany on guitar sometimes (when there isn’t a more senior guitar player in residence!) and I sing with Dan. Good beer and Irish pub food on offer. Always a great night!”

Former Employees Claim Chateau Marmont Is a House of Horrors