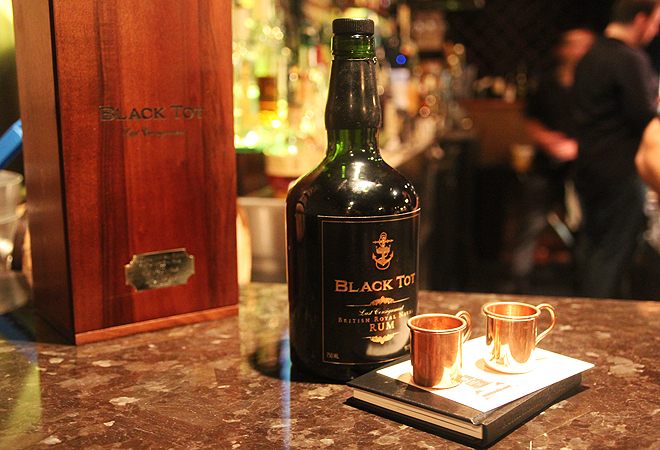 Remember last year when everyone went crazy for ol’ Pappy Van Winkle bourbon? At Christmas it was THE bottle to get…that no one could seem to get. This time the bottle booze nerds everywhere are lusting after is Black Tot Rum, the original British Royal Naval rum which had been sitting neglected in government warehouses for 43 years. The 6,000 bottles were finally released and are now up for grabs to the general public. If you want a bottle of your own, it’s about $1,000 at stores like K&L Wine. But if you’d like to simply taste it, Seal Beach’s 320 Main will be selling it for $80 an ounce.

The bar/restaurant will introduce and serve up the rarefied rum during a special invite-only Black Tot Day dinner tonight. And then customers will be able to purchase a taste at the bar. But what’s so special about this old rum? Its history.

For 300 years, the British Royal Navy gave its sailors a daily drink ration, once in the morning and once in the evening. In the 17th century, the ration was beer (since water back then wasn’t very safe to drink) but after the British captured Jamaica, rum took beer’s place. It was cheaper and could be stored longer than beer, which tended to go sour.

“The British navy started off with just Jamaican but as the British conquered more islands it was basically, ‘Who can we get the rum from the cheapest?’” 320 Main’s resident rum expert Matt Robold (RumDood) explained. “They found a blend of rums that the admiralty liked and that became the rum. So the Black Tot is a blend of rums from Trinidad, Guyana, and Jamaica.” Trinidad rums taste like vanilla, Guyana are a bit smokey and sweet while Jamaican rums have “a big, sour, funky taste,” Matt said.

The rum up for sale was originally imported from the West Indies in oak casks and then transferred to large oak vats. After the navy ended the rum ration tradition on July 31, 1970 (Black Tot Day) it was stored in bonded warehouses and only served during state functions and royal weddings.

If you don’t feel like breaking the bank for a taste, Matt says you can get an idea of what you’re missing by making your own blend. “If you wanted to make something that tastes like Black Tot, I’d get a little bit of Smith & Cross and El Dorado 12 or 15 Year Old and do it 2 to 1 (Smith to El Dorado). And that will give you something approximating it. Because you need that big funky flavor but you also want the smoke.”

Many rum geeks have wondered if Pusser’s Rum possesses a similar flavor profile to Black Tot since it uses the same recipe, licensed after the Navy ended the rum ration tradition. But Matt said Pusser’s is missing the smoke of Black Tot as well as its character. “Pusser is more like a mixer, Black Tot is more something you’d sip.” Just as well since that’s a $975 difference.

Needless to say, Black Tot Day, the day when the 300-year-old tradition died, is still celebrated by rum geeks and cocktail historians. Every year on July 31 at 4 p.m. (when the evening ration was doled out), they hoist up a tot (2 ounces of British navy style rum) and toast to The Queen. “I know that’s who they toasted on July 31, 1970—and the same damn queen at that!” said cocktail historian David Wondrich.

But if you want to be hard-core like those sailors, Matt suggests, “Do 38 milliliters (1 ounce) in the morning between 10 a.m. and noon and 38 mls in the evening.”