Home Uncategorized Downtown: The 11 New Bars You Need to Know About 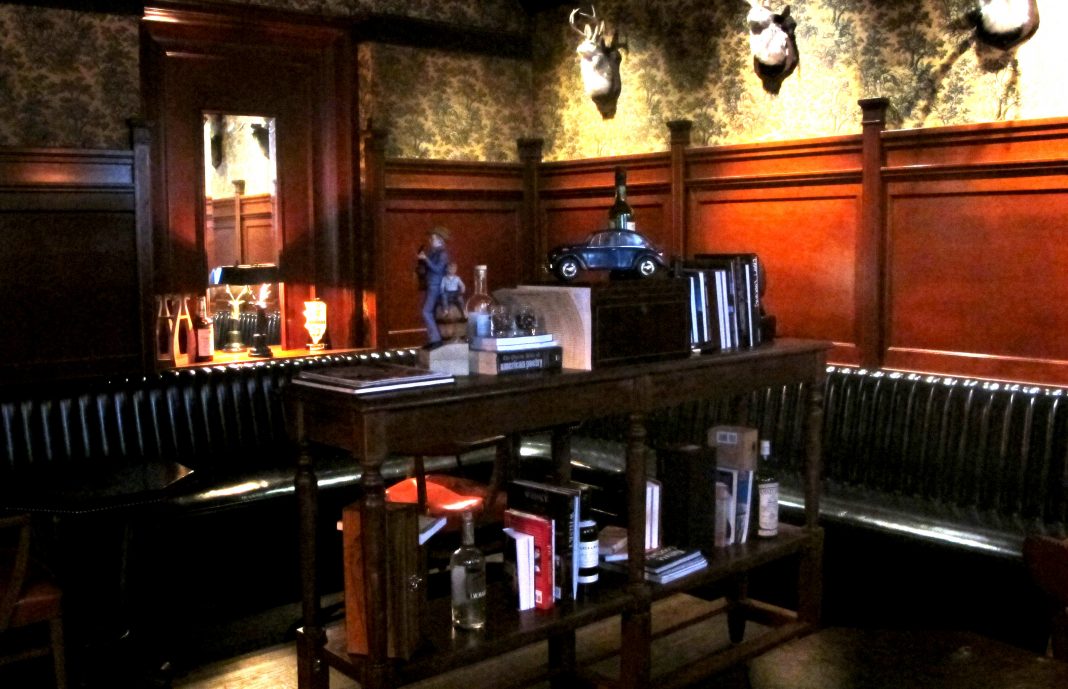 Downtown L.A. has been getting more love than usual, not just from Angelenos but the rest of the nation. (Thanks, GQ and Bon Appetit!) And amazingly it continues to grow and develop. To think it all really started gaining momentum back in 2007 when Cedd Moses first opened Seven Grand. Cut to seven years later and we have a boom of new watering holes, underground and overlooking the city, to add to the mix of already successful bars, sealing the deal that DTLA is THE place to do an epic barhop. Either take the Metro in or book a room at one of the many hotels.

✹ Bar Jackalope at Seven Grand: This new bar-within-a-bar, which opened in January, only accommodates 18 drinkers, emulating those intimate whiskey bars you find in Japan. In fact you can’t just saunter in from Seven Grand outside. Rather, you flick a light switch to get instructions on how to get in. Once in, enjoy the selection of 120 different whiskies, including rarities like Pappy and Balvenie Tun 1401 or the three classic whiskey cocktails. Ballers may choose to purchase a bottle of their own and store it in their very own whiskey locker at the bar.

✹ City Tavern DTLA at Figat7th: This downtown outpost is, frankly, bigger and better than its Culver City sister what with more space, more taps and a thoughtful and extensive cocktail program created by Brent Falco and Cari Hah (both formerly of Cole’s Red Car Bar). Thanks to their cocktail menu, you’ll probably end up staying here from happy hour, when you can get a decent cocktail for $5 to $6, through dinner for a desserty Grown-Ass Milkshake, to close with a flight of Manhattans.

✹ The Continental Club: From the folks who brought you The Room in Hollywood and The Association comes this basement bar which opened two weeks ago beneath Bar Ama. Meant to resemble the sort of gentlemen’s club you’d find in London it holds 300 stylish attired guests. Sip on fancy-pants cocktails like the Rolls-Royce or a “ferociously shaken” Sloe Gin Fizz.

✹ Crane’s Downtown: The first of two new downtown bars with “Crane” in its name, this one is where Crane’s Hollywood Tavern moved and opened in November. Take the steps down til you come across a massive door leading into an old bank vault. Thankfully, it’s not a speakeasy, but rather a chill, upscale dive bar. Here you get no frills, just straight-forward drinking.

✹ Honeycut at the O Hotel: True, this discotheque/craft cocktail bar opened in October of last year but it still bears mentioning. It’s where bartenders go to boogy down and lay back. With one room dedicated to a carefully crafted drink and the other a fun selection of cocktails on tap, you can’t go wrong.

✹ Nest at WP24: Wolfgang Puck’s new 4,100-square-foot venue, which takes the place of the WP24 lounge on the 24th floor of the Ritz-Carlton, opened just this month. Stop by for a bar bite like tiny dumplings or a dinner of crispy black pepper pork belly but definitely stay to explore the 300-wine list. Or there are cocktails like the Bourbon Buddha with sage, Buffalo Trace, Aperol, lemon juice, and simple syrup, and the Bird of Paradise with 209 Gin, lemon juice, orange wedge, simple syrup, and club soda.

✹ Peking Tavern: Rounding out the basement boozeries, this Chinese gastropub is located in the basement of NCT Lofts and boasts to be “Home of the Bai Jiu Cocktail.” For those unfamiliar with this pungent Chinese liquor, best tread lightly. Definitely an acquired taste but you can ease into it with their Peking Coffee, a mix of Bai Jiu, coffee and horchata liqueur. Or try out their Peking versions of an Old Fashioned and a Manhattan, both made with Peking bitters.

✹ Tom’s Urban: Taking the place of ESPN Zone in L.A. Live and opening just this week, this gigantic two-level sports bar is the place to go if you want to catch the game, any game, on one of the 80 TV screens. For your immediate drinking needs, there are cocktails on draft by barman Joel Black (Comme Ca).

✹ Upstairs Bar at the Ace Hotel: Everyone keeps talking about this gorgeously, romantic new poolside roof bar at the stunning Ace Hotel. It’s definitely THE place to take that special someone, aka the person you want to get it on with. Just make sure to come early to avoid the long line. The cocktails here are twists on tropical cocktails, showcasing aperitifs, gin and whiskey.

✹ Wendell: Former Bukowski dive bar hang Craby Joe’s was made new again, openinglast October. Even though it’s sleek with its dark wood and long, polished bar, it’s still all about chill drinking for the neighborhoodies rather than the next big cocktail trend. Settle in and order up a tasty craft brew or a canned Schlitz while pondering the fact that you’re under the roof where U2 filmed that “Where the Streets Have No Name” video.

✹ Wolf & Crane: This Little Tokyo bar, which opened in December, celebrates the Japanese trend of highball bars and features 10 different highballs, simple cocktails made with booze and soda. You’re in a hurry to get your drink on, then this is the place.