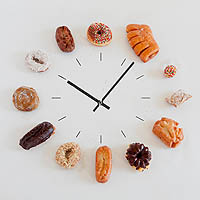 No, it’s not National Donut Day—again—but next week does bring two ways in which to celebrate the almighty danish.

First up: Remember when pirates were big? It was around the same time that you were really into green tea and worried about bird flu? Anyway, Krispy Kreme wants us to remember those days fondly with their “Say ARRGHH!” promotion on September 19, National Talk Like A Pirate Day. Any customer who walks into a participating Krispy Kreme location and talks like a pirate will receive one free original glazed doughnut. Feeling extra nerdy daring? If you dress as a pirate you’ll receive a free dozen glazed doughnuts. But leave your swashbuckling sword at home—the promotion clearly states that no weapons are allowed.

Then on Saturday, September 22 ForYourArt hosts 24 Hour Donut City II. The 24-hour pop-up shop will once again stock a selection of free donuts to celebrate artist Christian Marclay’s 24-hour art film, The Clock, which will be screening at at LACMA. This go round, ForYourArt asked LACMA employees to pick their favorite doughnuts from around the city, including director Michael Govan who picked the coconut cake doughnut from Bob’s, and Film curator Elvis Mitchell who picked Randy’s buttermilk variety. ForYourArt is located at 6020 Wilshire Blvd., just across the street from the museum.