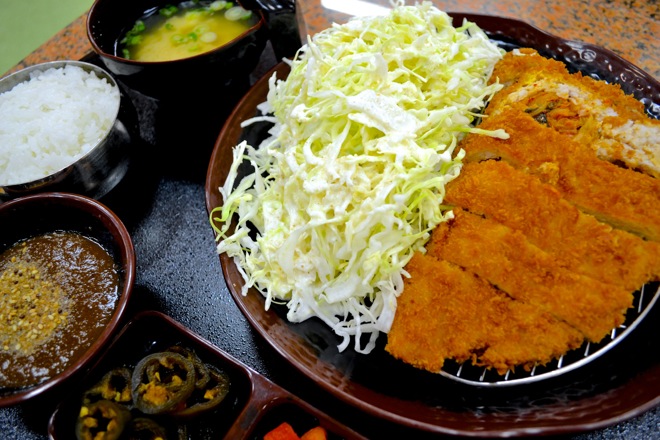 Donkkaseu, the Korean interpretation of the Japanese tonkatsu—a breaded pork cutlet likely linked to the French veal côtelette—is a pretty meaty dish by Asian standards. The typical Japanese tonkatsu meal consists of a thin piece of pork tenderloin that’s been battered with flour, egg, and panko breadcrumbs before getting deep-fried, commonly accompanied by shredded cabbage, rice, and miso soup.

But for a Korean spin, you’ll want to head to Katsu Japanese Cutlet, the freshest arrival to the Galleria Market food court in Northridge. (Translation key: katsu is actually the Japanese word for cutlet; tonkatsu = pork cutlet.) Thankfully, this new food stall took the place of the prior tenant, an awful Vietnamese pho noodle joint. And, just as the former pho restaurant only focused on pho, Katsu specializes in pretty much one thing: cutlets. That’s all they do, and they do it well. For variety though, you can select from different kinds of cutlets: pork (the main attraction), chicken, fish, hamburger, or shrimp, all copiously portioned.

But, what makes it Korean? What draws the line between tonkatsu and donkkaseu? Well, at Katsu, every hefty platter comes with two traditional Korean banchan sides: jalapeño slices marinated in soy sauce and kkakdugi, small cubes of radish kimchi. And the traditional shredded cabbage you’d expect from Japanese tonkatsu gets a Korean makeover with a small amount of mayo worked into the pile, making a simplified coleslaw of sorts.

Minor variations, no doubt, but if you choose to get the kimchi pork cutlet like I did, then you’ll very clearly see that you’ve officially egressed the tonkatsu border and ventured deep into donkkaseu territory. Here you’ll discover the thin cutlet of pork has been rolled over onto itself at one end to embrace a wad of kimchi which, by the time the cutlet finishes frying, has softened in texture, with much of the spicy zest and kick dialed down to leave only a pleasantly pungent sourness. The meat remains savory and moist, while light and airy bits of crunchy panko crust punctuate each bite, with no off-putting greasiness.

Dipping sauce is a big deal with this dish, and Katsu offers a delicious house-made tonkatsu sauce, which tastes a bit like a date paste. It’s a blend of pineapple juice, soy sauce, ketchup, and a sprinkling of sesame seeds that adds a sweet contrast and a layer of umami to the savory pork. This sauce variation is another Korean leaning, since the Japanese prefer mustard, ponzu, grated daikon radish, or even wasabi alongside their katsu.

There are a few other restaurants in L.A. that also offer donkkaseu, like Myeongdong Donkasu in Koreatown, but Katsu in Northridge has perfected getting the sheath of breading to firmly adhere to the pork instead of shedding upon contact, as it does at most other restaurants I’ve tried.

And if all this flavor, texture, and Japanese-Korean-French crossover stuff isn’t enough for you, there’s also a kimchi cheese pork cutlet, served with a melted orange slice of fromage that’s perhaps an attempt at adding some American flavor to this international pork patchwork? Or it could be that the chef just likes cheese. Either way, I’m happy to report that this little Korean katsu shack is arguably as good, dare I say better, than popular Koreatown cutlet destinations like Wako Donkasu. At the very least, the selection here is more interesting.