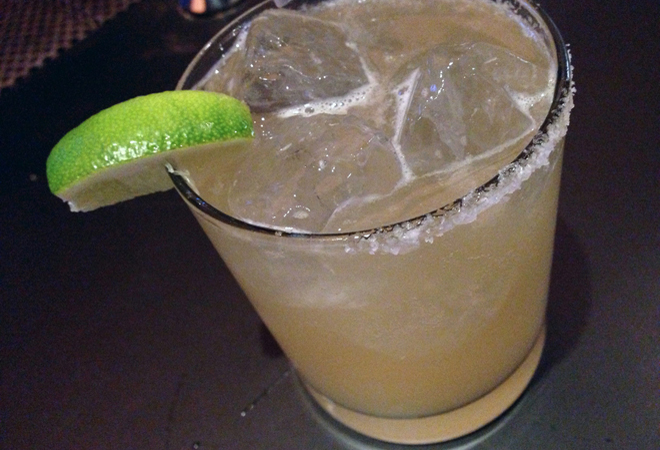 What would make this Texas Margarita taste better? Hot links. (Photography by Caroline on Crack)

When attending a barbecue party, have you ever wished that someone broke out cocktails to enjoy with the grilled meats, at least in addition to beer? Mint Julep me! Jason Bernstein, co-owner of new La Brea barbecue joint Bludso’s Bar-&-Que, sister location to the beloved Bludso’s BBQ in Compton, has got you covered. Yes, he’s famous for his craft beer expertise at his other restaurant Golden State, but he’s also pretty astute about cocktails and cocktail history. He won’t drop the lemon peel in a Sazerac—that’s how hardcore he is.

At Bludso’s he and general manager Zak Fishman created a cocktail list suited for the casual vibe of a barbecue joint. And as luck would have it, their cocktails also complement the meat-intensive menu nicely. If you want to try something other than beer with your ’cue, test out these pairings as offered up by Jason.

Julep on Tap: The most popular cocktail at Bludso’s is this one, mint-infused bourbon on tap which is then mixed with a splash of club soda and sugar. “I love the idea with the julep with something saucy. Since all our sauce comes on the side, another way is to think of the minty flavor as something that picks up intense meaty flavor. Like when you have lamb with mint jelly. If that’s the case, rib tips, julep and a bit of the spicy BBQ sauce might be a real winner.”

Jackpot: A version of a Highball made with concentrated ginger juice, bonded bourbon, lemon, soda. Would work well with the brisket and rib tips, who are long smoked with a less complicated spice rub. “The ginger would give you some extra spice to it.”

Iron Mine: This favorite of both Jason and Zak is no longer on the menu, having been replaced by the Old Fashioned, but you can still order it. Jason feels the combination of Brugal and Smith + Cross rums, demerara cane syrup and lime would work well with the complicated, deep spice rubs of the pulled pork, pork ribs and chicken. “The Iron Mine is just a simpler drink that would cleanse the palate.”

Texas Margarita: A really light, refreshing mixture of tequila, limeade, and Pabst Blue Ribbon is a natural with the links and a sultry, summer day. “It’s the second most ordered drink behind the Julep because you can have more than one.”

Jalisco Honey: Jason likes this mezcal Negroni—Bombay Dry, mezcal, Punt e Mes, Campari—as a digestif. Traditionally the Negroni is an aperitif cocktail but he likes to have one at the end of his night at the restaurant. Or try it with the long-smoked brisket which works well with the cocktail’s smokiness and bitterness.

Fernet Branca on Tap: This bitter Italian liqueur is a no-brainer as a tummy soother. Even the menu recommends it for those who feel full. But what makes this draft version so special is its silky mouthfeel thanks to the nitrogen gas that comes from the creamer faucet