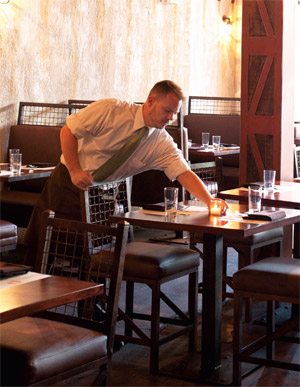 Photograph by Lisa Romerein
*THIS RESTAURANT HAS CLOSED

George Abou-Daoud specializes in creating places that get the details right. In the half decade since launching the Bowery on Sunset Boulevard, he has opened five other establishments within a 15-block stretch of the street. Though subtly distinct from one another, all of his properties share a vintage, neighborhood feel that stands in contrast to juggernauts such as Katsuya Hollywood and star vehicles such as Eva Longoria and Todd English’s Beso that have moved into the area. With their pressed-tin ceilings and elbow-burnished bars, Abou-Daoud’s restaurants present something of a paradox: More than new places made to look old, they seem like gems left over from long before the recent wave of revitalization.

A 36-year-old native New Yorker, Abou-Daoud made his money in banking before coming to L.A. He isn’t catering to Hollywood day-trippers; he’s providing respite to the people who live and work nearby, people who get their atmospheric kicks from glimpsing a deco apartment’s neon rather than from having their picture taken posing over a sidewalk star. The booths and tables of Delancey, which Abou-Daoud opened in 2008, might be full of diners enjoying soulful ribollita soup thick with cannellini beans and wedges of bread, but squint your eyes and they could be habitués of a venerable Lower East Side saloon. Mission Cantina riffs on slightly over-the-top old-line Mexican restaurants: a scuffed floor, swap meet landscapes, and items like nachos that are just heavy enough to communicate a lack of interest in authentic fare. At the Bowery, customers cram into Naugahyde banquettes under that tin ceiling for straightforward burgers. Abou-Daoud says he modeled Tamarind Ave. Deli, where you can get a spot-on slow-roasted brisket sandwich with smoked mozzarella and browned onions, after the corner sandwich shops where he grew up eating on the East Coast.

With District, which opened in March, he goes beyond the safe waters of imitation. This is his first stab at a low-affect, high-quality contemporary restaurant. To man the stoves, he’s brought in Kris Morningstar. The young chef earned recognition at Blue Velvet, a venture in a converted Holiday Inn on the edge of downtown, where he negotiated the sceney demands of the place with some truly expressive cooking. In this case, Morningstar is working in a converted photo lab: a restored Spanish colonial revival building whose terra-cotta tiles, wrought-iron accents, and tobacco brown friezes glow against blazing white walls. Inside, a gorgeous antique French mahogany bar cuts across a tall-ceilinged room where rivets have left lovely, russet-colored watermarks trailing down the wall. Booths made of distressed metal lend an industrial aspect to the space, which sits next door to the Mercantile, a gastropub Abou-Daoud opened four months before District.

Morningstar oversees both menus, which must be slightly confounding for the man: District apparently intends to be a somewhat casual restaurant that’s serious about its food, but the Mercantile has similar aims. Morningstar’s challenge of differentiating the businesses is one of tone: The Mercantile’s wood ceilings, antique wallpaper, jelly jar glasses, and prominent wine barrels suggest a kind of quotidian gastronomy; it’s a place to pop in for artisanal vittles like a semolina budino with truffle cheese or a chicken liver mousse and duck confit salad. District relies on the usual cues—darker lighting, a well-dressed hostess, tie-bedecked busboys—to make clear that its ambitions are somewhat loftier. The food isn’t necessarily more expensive than the Mercantile’s; sometimes the ingredients are even the same. What separates the $14 rabbit crepinette served at District from the $18 rabbit leg served at its neighbor is attention. The caul fat (from the stomach lining) that envelops the meat of the former is crisped, while a scattering of morels amplifies the dish’s country spirit. At the Mercantile, the kitchen has taken bistro efficiency a little too literally: The finishing mustard sauce is like library paste.

The two menus look the same as well: single-page, light-bond paper. But at least the Mercantile’s distinguishes between small and large plates. District’s does not. I’d speculate that throwing everything together is the restaurant’s way of establishing its cred as a place that doesn’t regard itself so seriously it would actually divide the meal into courses. The result is that you have to get guidance from the waiter as you sift through a bill of fare that skips from Yorkshire pudding to shrimp and grits to cheesy rice agnolotti with porcini sauce. The document is so random, it’s possible that during a meal, one person can be nibbling on excellent bar food like the soft-shell crab sandwich as their tablemate picks over a fussy, overthought plate of squab that rests on oatmeal with huckleberries and baby turnips.

It might work better if there were a unifying approach to connect the dishes. But you sometimes get the feeling here that the menu is simply echoing trends. Soft-boiled egg? Check. Southern comfort food? Check. Innards? Got ’em. There’s nothing necessarily wrong with any of this; in fact, the kidney sauce on the gnocchi has a pure intensity. But a central point of view seems absent. You don’t get a sense of what Morningstar stands for, whether he’s a produce-oriented chef, someone who worships the open flame, a pointillist obsessed with micro gradations of texture. Though he’s talented enough to succeed in a number of styles and could head a chef-driven enterprise, his personality doesn’t always register; a lot of dishes stop at being “just fine.”

Morningstar is most impressive when he’s being direct. His breads at District are particularly good. Whether it’s the jalapeño and cheddar biscuits, the warm rolls served with pungent garlic butter, or the Yorkshire pudding redolent of duck fat, the $3 baskets are a great way to begin a meal. That same pleasure in the everyday comes across in the shrimp and grits, a soupy Southern classic that he presents in a peppery gravy. Morningstar shows brawn with the treviso salad, treating the radicchio like romaine in a good Caesar, with the crunch of the leaf ribs acting as a base for the caper-tinged gribiche dressing.

Among the main courses (assuming that’s what the bigger plates are called here), the subtle musk of the sweetbreads—a big pan-darkened lobe—is rounded out by bacon-date puree and a Banyuls vinegar reduced into a glaze with beef broth. The mustard-scented bread crumbs and roasted fingerlings add a brilliant meatiness to the fillet of Columbia River salmon. The same technique falls short when Morningstar coats the arctic char with marrow crust, oddly accompanying it with heart of palm. The ingredients lie there in mute relation. On the other hand, the rack of lamb paired with tender poached lamb tongue is a dish that sits squarely in Morningstar’s wheelhouse—rustic while not being showy about it. There’s an artistry in the way the artichokes are sculpted, in the contrast of seared and poached meats, and in the clean, defined taste of the lavender-scented jus.

The trio of desserts has a similarly restrained lyricism. The prune financier is superb, its crispness a delicious foil to pistachio ice cream, but the best of the offerings is a cherry-laden chocolate soufflé. It is a grand dessert done with finesse. By the time the table is cleared, the waiter plops down a saucer of toffee lozenges that are intended as a generous gesture but wind up seeming almost sad, they’re so rudimentary. The amuse-bouche that starts each meal is more successful (the fried scallop with tartar sauce over shoestring potatoes was ethereal), but bookending the evening with such flourishes is from the playbook of a more formal restaurant.

To me, what’s at work is the clash between Abou-Daoud’s gift for fashioning casual spots and his ambitions to become a significant restaurateur (he’s opening another spot soon). He’s hired a real talent, but then the chef is listed at the bottom of the menu as “Kris ‘Running to Mexico’ Morningstar” alongside kitchen mates “Kevin ‘Hubris’ Napier,” “Huy ‘Ranching’ Nguyen,” and “Josh ‘Raising Arizona’ Graves.”Maybe they just want to be democratic or, rather than sounding like a frat house, create a cast of characters to signal a certain intimacy with diners. Still, there’s a mixed message about what niche this restaurant seeks to fill.

That may sound like an abstract point, but part of a restaurateur’s job description is editing possibilities to come up with an understandable whole. There are places where you have to wait in line, places where you tie on a bib, and places where you know to don your snazziest clothes. All are equally capable of casting a spell. A restaurant doesn’t have to hit a bull’s-eye, but it has to at least have a target. Without one, District exists in vagueness, an imperfect restaurant in a perfect shell.