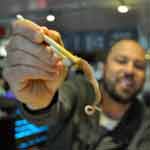 Not to be confused with this weekend’s “Dinner To Dye For,” next month’s zombie apocalypse preparedness seminar at Beachwood BBQ & Brewing in Long Beach will indeed be a dinner to die for.

Beachwood BBQ chef Gabe Gordon was contemplating the seemingly imminent end of days (seriously, it’ll only be a matter of time), and commented to Gev Kazanchyan—founder of the famed food and drink pairing series DioNicEss—how great it would be to host a zombie-themed beer pairing dinner, with all sorts of imaginative food that somehow related to the walking dead. Kazanchyan, also a public health professor, added that he could incorporate several colleagues of his that would be able to discuss zombification with attendees and provide professional insights on how best to survive a necromorph uprising.

The resulting dinner—composed of at least five courses—has temporarily been renamed DieN’Isis to honor the ancient Egyptian goddess of rebirth and reincarnation, and will focus on the chronological elements of transformation:

And each course—NOT for those that have any dietary, philosophical, or emotional limitations whatsoever—will be expertly paired with similarly themed beers, each brewed specifically for this event by Beachwood BBQ & Brewing, Eagle Rock Brewery, Monkish Brewing Co., Phantom Carriage Brewery, TAPS Fish House & Brewery, and The Bruery.

Speakers covering topics related to the undead include a pharmacologist, an expert in forensics, and a neuroscientist, among others. They will guide guests through what they might expect in a zombie apocalypse, and how best to prepare themselves “should” one ever occur.

(Disclosure: I have cooked for and helped with several DioNicEss events in the past. I continue to assist with their P.R. and media outreach, though I receive zero compensation from my involvement. It’s just something creative and fun that I enjoy being a part of.)