Home Uncategorized Dinner as Entertainment: How to Dine at Trois Mec 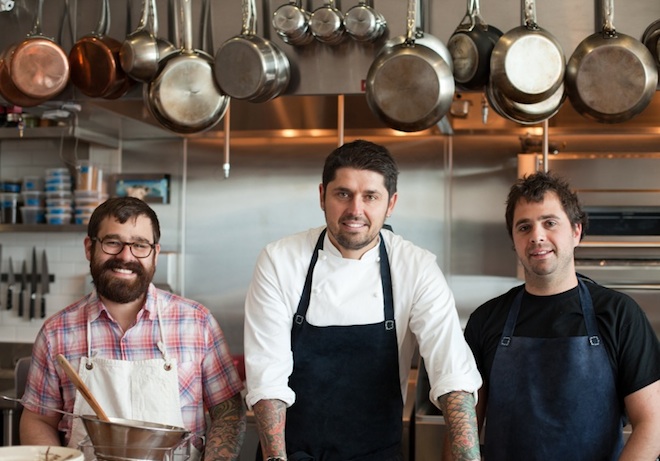 The hottest new restaurant in town lives under an old Raffallo’s Pizza sign near the corner of Highland and Melrose and is half hidden by a gas station. The rumors of its existence have been rumbling for over a year. And now, finally, later today, you can make a reservation at Trois Mec, the newest restaurant from Animal/Son of a Gun guys Jon Shook and Vinny Dotolo as well as pop-up impresario, chef Ludo Lefebvre.

The Los Angeles Times broke the news this past weekend when it was confirmed that Trois Mec would use a ticket system in conjunction with its reservation system. Guests who wish to dine at the restaurant are required to pay for their meal before they even walk through the door. Each dinner costs $97.13 and includes tax and tip, but excludes beverages.

“We considered everything — no reservations, putting a deposit on a credit card,” Krissy Lefebvre, Ludo’s wife and partner, told the Times, “But people pay for tickets for entertainment. This just happens to be entertainment in the form of dinner.”

Registration for tickets is to be available today—or at least, “this is the plan,” says Krissy Lefebvre. Technical difficulties have pushed the official launch back a few hours. After patrons register today, they are then eligible to purchase tickets starting tomorrow morning at 8 a.m. Reservations will only be available for the next two weeks. Ticket sales will then start up again in two weeks, on that Friday.

Will they sell out? Is it always sunny in L.A.? Does the ocean make waves? Is there traffic on the 405?