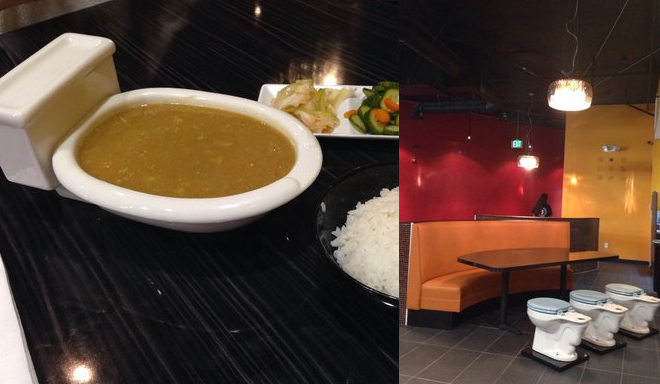 This past weekend, a concept called Magic Restroom Cafe opened in the City of Industry. As far as themed restaurants go, this one is a butt head scratcher. Imagine a dining room set up with banquettes, tables, and—in place of chairs—toilets. But the owners of Magic Restroom Cafe didn’t stop there. Get this: they are serving their signature dishes in miniature ceramic toilet-shaped bowls.

I have so many questions about why there is now a restroom-themed restaurant in the city—and further, why this isn’t the first such restaurant of its kind in the world. The government might still be more or less in the crapper, but does our dining scene have to go with it?

To make matters worse, this is not even the first toilet themed restaurant in the world—it seems to be a trend throughout Asia, with at least three different commode-inspired concepts from Tokyo to Taiwan. Not that I want to encourage this kind of thing, but why limit the trend to Asian food? After all, I can think of plenty of other cuisines with dishes that look (but do not taste) like crap.

Mole (Mexican): Have you ever tried to photograph mole? It looks shitty every time.

Chocolate frosting (American): Particularly when it’s piped into swirls atop a cupcake.

Daal (Indian): It’s hard to argue with the fact that brown lentils stewed with spices have the consistency of loose stool.

Everything on the menu at Del Taco.

Beef stew (British/American): If it’s been simmered for too long, the meaty bits start to fall apart and the peas turn brown and it all starts to look a lot like a steaming pile.

Magic Restroom Cafe, forgive me, but for the sake of all that’s appetizing and right with the world, I really hope you tank.