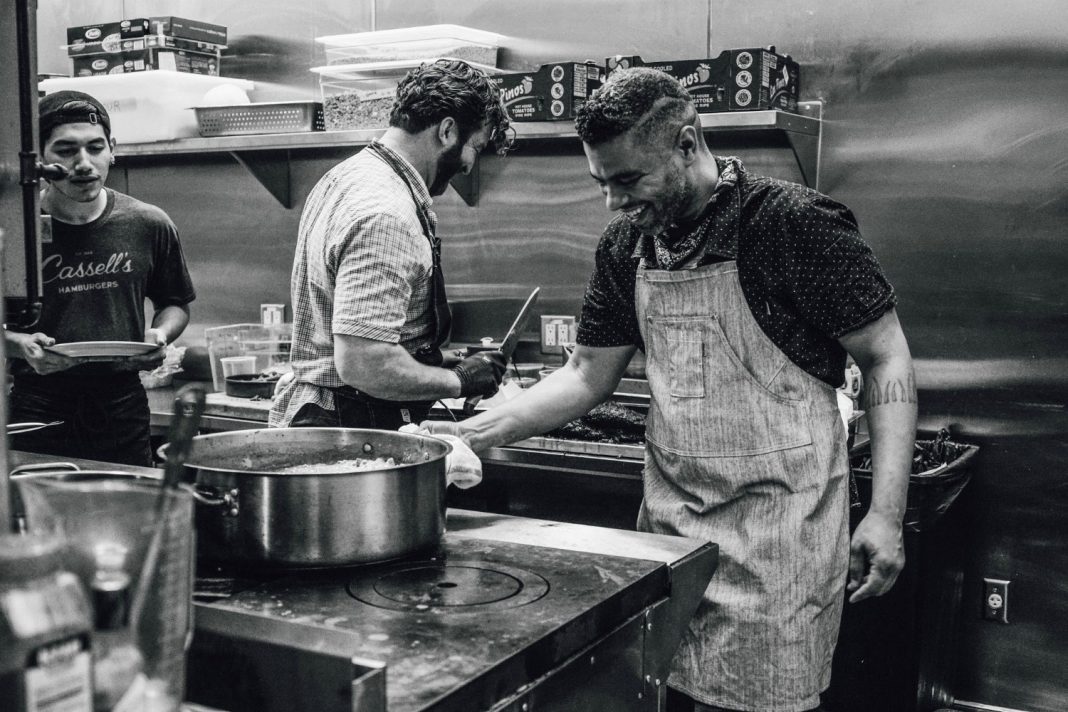 During L.A.’s gourmet food truck phenomenon in 2010, Dante Gonzales made his first splashy West Coast fried-chicken debut with his Ride or Fry eatery on wheels. Up until that point, the chef was making a name for himself through the wild, underground music and fried chicken parties he used to throw in his Brooklyn, New York, loft, with performances from the likes of then-budding artists Santigold and Azealia Banks. Now, nearly a decade later, Gonzales is back to slinging fried chicken to the masses in L.A. with his DFC Ghost Kitchen delivery-and-pickup service, headquartered in Koreatown’s Hotel Normandie.

There’s more to DFC, which stands for “Dante Fried Chicken,” than the obvious. DFC Ghost Kitchen, which launched in late August and can be found on food delivery apps from Wednesday through Sunday evenings, also offers 15-spice ribs, tomatillo collard greens, and smoked-pimento mac ‘n’ cheese.

Many of Gonzales’ recipes are updated takes on his grandmother’s cooking, which was inspired by her upbringing in New Orleans and love for Mexican and Guatemalan culture. Even though slow-roasted meats and fried chicken make up half of Gonzales’s menu offerings, quite a few of his sides are vegan.

He refers to his style of cooking as “Transatlantic African” rather than, say, soul food. “It’s an amalgamation of African, European, and indigenous American cultures all rolled into one,” Gonzales says. “If you look at it more broadly instead of calling someone Black, Dominican, or Jamaican, but actually look at the whole entire thing as Transatlantic African, then you’re not going to look at it [as being] so one- or two-dimensional. It’s actually multi-dimensional. There’s no person of African descent who’s full African. If you get a DNA test done, you’re going to be mixed. That’s sort of the spirit of my food. It’s an amalgamation of all these things.”

Growing up in grandma’s kitchen

The 45-year-old chef and L.A. native spent many summers during his formative years helping his grandmother, a registered nurse, in the kitchen for her side hustle as a caterer. Gonzales remembers being brought along on cooking gigs at Beverly Hills mansion parties for celebrity clients like Charlton Heston and Bette Davis; she would introduce Gonzales as her sous chef. He’d do whatever his grandmother asked of him, including cleaning chitlins, shucking corn, and churning butter, all in exchange for Transformers and G.I. Joe action figures.

Gonzales’ grandmother was secretive with her recipes. (“I think it was a thing back then, [where] people died with their recipes,” he says.) It wasn’t until he went off to college in the Bay Area to study film and music and paid for school through restaurant kitchen jobs that he began to understand what she was doing. Gonzales started recreating her recipes by memory.

One of these recreations is one of his most popular dishes at DFC Ghost Kitchen: the Sock-It-To-Me Fried Chicken Tenders. The strips are coated in a granola of sorts, consisting of a mixture of ingredients like Cheerios cereal, Swedish crackers, Rice Krispies, hemp seeds, and other crusts and seeds he finds on his travels around the world.

“[The recipe] came from my grandmother’s mother when the [Great] Depression happened,” Gonzales explains. “They were really poor, so when they made fried chicken, they would cut it with ground oats and old, stale bread. That metamorphosed into this granola fried chicken. Everyone in my family would make my grandmother’s chicken, but some people would put more or less things in it.”

At DFC Ghost Kitchen, Gonzales has also incorporated his grandmother’s coconut honey biscuits and pineapple shallot skillet rolls on his menu, tweaking the recipes to fit in with his tastes. His smoked brisket is coated in a chocolate cocoa powder dry rub and five types of peppers, resulting in something akin to mole. It’s smoked for six hours and then braised in orange juice and stout.

“I’m trying to be thoughtful, chef-driven, and creative because my grandmother was all of those things even if she may not have felt as though she was recognized [by others for her efforts],” Gonzales says. “I strive to be like her.”

Gonzales was shaped by his grandmother’s cooking, but he was also heavily influenced by music through another family member. His grandfather, accomplished tenor saxophonist Jimmy Forrest, performed with the likes of jazz greats like Miles Davis and Count Basie. Forrest was popularly known for recording the hit track “Night Train.”

It only seems fitting that Gonzales would start throwing underground music, film, and fried chicken parties in his bare-bones, Williamsburg loft in Brooklyn in 1999. He called them his “KFC RIP” parties, and referred to them as “jump-offs” rather than “pop-ups.”

“These parties turned into a crazy underground circus,” Gonzales says. “I wanted to do these conceptual parties that were all about community and music and I noticed that the first time I tried to throw the party I didn’t really put the emphasis on the chicken. I was being a supercilious conceptual artist and didn’t want to make food the focal point. What I quickly realized was that food is a non-pretentious medium to bring people together even more so than music—and music’s already up there.”

The KFC RIP parties were invite-only events, in which guests would only be able to get in if they had special fried-chicken cards. Back then, Gonzales says Williamsburg was a different beast, not like the upscale area it is today. “The people that did come were the bravest of the brave because nobody ever went to Brooklyn [then],” he says.

Gonzales eventually moved out of his loft and the parties shifted to bars, other lofts and art galleries. “I became this nomadic fried chicken man traveling all over New York doing parties,” he says.

In 2007, the events paved the way for Gonzales’ variety-cooking show called Dante Fried Chicken Show, which was viewable on YouTube and MySpace at the time. Gonzales would work with a few artists and musicians, cooking with them in the kitchen, and then showcasing the dishes, paired with a performance. He filmed these parties throughout New York and in Europe, from London to Sweden.

Musicians Santigold and Azealia Banks had some of their first performances at Gonzales’ parties. One of the memories that sticks out for him is when he was in London filming an episode with rapper and singer Rye Rye. At the time, they were told that fellow rapper M.I.A., who was pregnant, would not be coming on the show as scheduled. “All of sudden, [M.I.A.] comes and rolls through the party. We were all happy, like, ‘Oh my God, M.I.A., you’re here, Boo. She was like, ‘Where’s the chicken?’ [with attitude]. I had two trays of chicken and she took both trays of chicken and bounced,” Gonzales recalls, with a laugh.

At the parties, the cameras were always rolling and Gonzales constantly had his mic on. Most of the videos have since been taken down from the internet as he’s in the process of piecing together clips from the events for a documentary on the subject.

“This is going to be a crazy fucking documentary,” Gonzales says.

Setting down roots back in L.A.

Gonzales’s parties and his online show eventually led to his illegal food delivery service in New York in 2009. In those pre-apps days, customers would place orders via phone, and Gonzales had a fleet of bike messengers who would deliver the goods at street corners and on the Brooklyn Bridge. When the Cooking Channel filmed a segment on the delivery service, the business blew up. He quickly raised $10,000 and—inspired by Roy Choi’s launching of Kogi BBQ—used that money to leave for L.A. in 2010 to open his own food truck with some friends.

“[We thought], ‘Well, this is a really interesting movement and our brand is totally nomadic and it’s about [being] mobile and different cultures and traveling,” Gonzales says about the impetus in starting his food truck.

He continued to run his mobile eatery for the next couple of years and eventually landed a cookbook deal with the publication of Ride or Fry: The Dante Fried Chicken Experience in 2012.

Gonzales didn’t originally plan to stay in L.A., but he’s still here. A few years ago, he joined the Hotel Normandie team and has been catering for events at the space. He says they approached him to become a part of his DFC brand. “Now we have a beautiful relationship,” he says. “We’re partners and we’re going to try to take this to the next level.”

Currently, DFC Ghost Kitchen is delivering in the neighborhoods of Koreatown, Mid-Wilshire, and East Hollywood, with plans to expand their radius, through Grubhub, Caviar, and Postmates. They’ll soon be on Uber Eats and Door Dash as well. For folks who’d rather pick up their food, they can place an order by calling (323) 813-1424 or send DFC Ghost Kitchen a message on Instagram, and then grab their orders at the hotel’s restaurant, Cassell’s Hamburgers.

Most exciting of all, Gonzales is taking it back to his roots, with plans on bringing back his KFC RIP parties. L.A. is in for a treat.

Something Old, Something New at Cassell’s Hamburgers