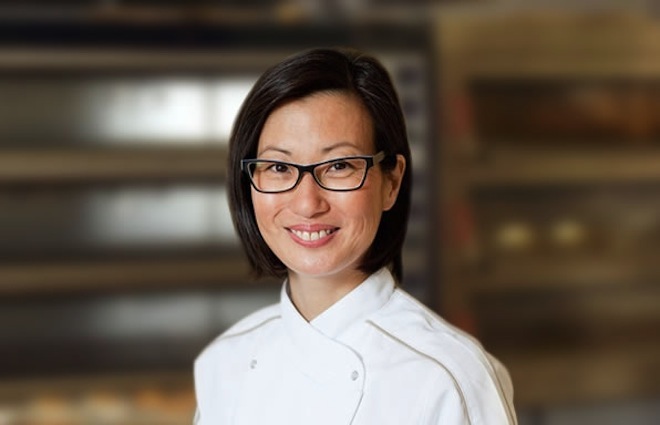 As we reported last week, pastry chef Sherry Yard is leaving the Wolfgang Puck Fine Dining Group after nearly two decades (a.k.a. FOREVER in the restaurant world) to re-open the famed Helms Bakery in Culver City with chef Sang Yoon.

News came this morning of who will be taking over for her in the Puck empire, and it’s none other than pastry chef Della Gossett, a veteran of Charlie Trotter’s kitchen for close to 10 years. She’s also been a pastry chef instructor at the French Pastry School in Chicago when she’s not busy, y’know, winning the 2011 National Pastry Team Championship and taking a silver medal at the 2012 World Pastry Championship. (NBD…)

Papa Puck sayeth, via press release: “I already know [Gossett’s] amazing talent and have tasted many of her amazing desserts when she worked at Charlie Trotter’s, one of my favorite restaurants. […] I know she will make a great impact at Spago and will create new, delicious, and exciting desserts.”

Yard will be staying on with Wolfie through mid-January before handing over the post to Gossett. Preview tastes of the Helms Bakery menu will become available around the same time at Father’s Office 2.0 in Culver City. We’re looking forward to putting on our stretchy pants and scoping it all out… for “research.”