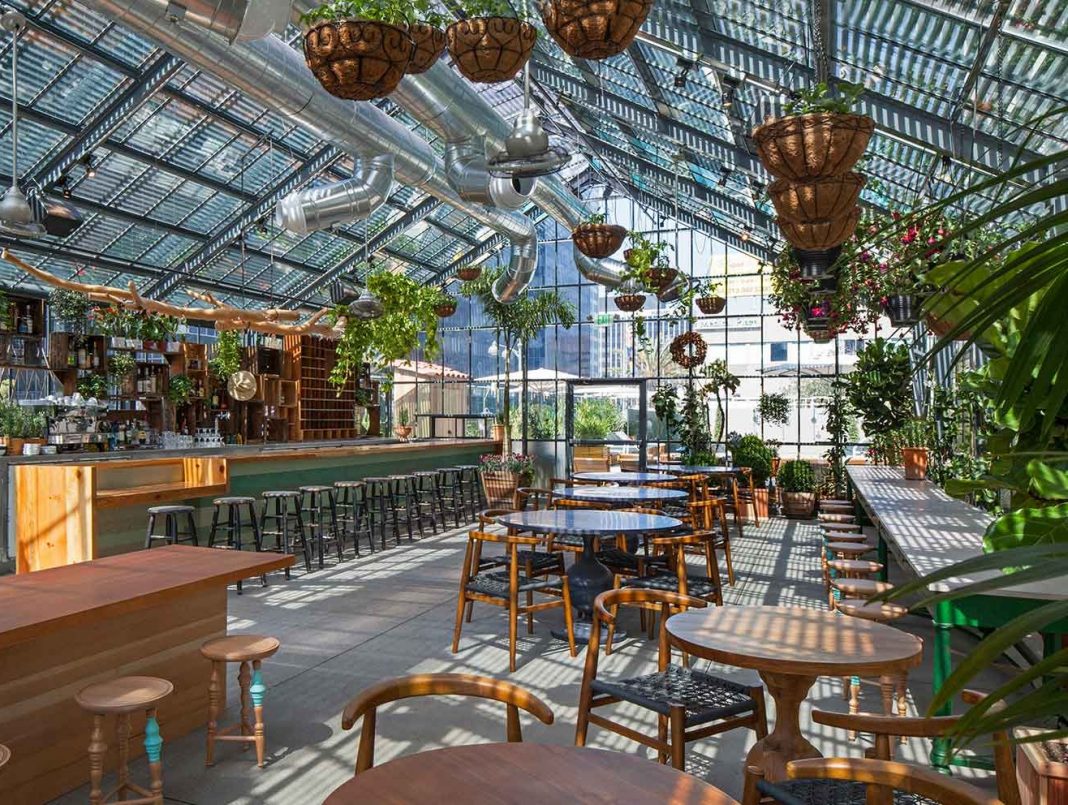 If Roy Choi’s POT is the dispensary, than Commissary is the rooftop grow-house overlooking Wilshire Boulevard. The chef and Kogi founder’s latest venture is a vegetable-centric restaurant located on the second floor of the Line Hotel. Looking around the place, Choi’s 2013 MAD lecture comes to mind, where he spoke of the ability—or rather the courage—to feed quality, healthful food to the masses. Here, a greenhouse replaces the traditional brick and mortar structure, complete with a garden of overflowing plants. Its doors officially opened last night, and here’s what stood out about Papi Chulo’s new digs.

There Aren’t Any Words on the Menus
Commissary’s picture-only menus come tucked inside a repurposed envelope, bearing the names and (fake) addresses of Commissary employees. In five separate enclosed boxes that delineate different price ranges, you’ll see hand-drawn pictures of food items like corn, a radish, an eggplant, a fig, a and a scallop. In case you are struggling to decipher the image, tiny letters placed next to each picture refer back to a footnote. A separate index card provides further details behind each dish. Slightly confusing? Maybe, but nothing insurmountable.

It’s in a Greenhouse
Let’s hope you don’t mind the occasional fly or ant on your table, because you’re in an actual greenhouse bustling with plant life. The interior space was designed by frequent Choi collaborator and landscape architect Sean Knibb (who also designed POT).  Think of a lush, tropical version of the Ace Hotel rooftop—minimalist and chic. The inside is decorated with an array of ferns and greenery while potted plants hang from the ceiling. Revolving fans and a large air vent running through the center of the space do a stellar job of keeping you cool (remember, this place ideally traps heat). Bring your swim trunks just in case: 20 feet away is a pool where you can order drinks and food from a separate (for now) menu.

Vegetables and “Mother Sauces”
Choi’s concept focuses on vegetables, giving a nod to the farmers who grow California’s bountiful produce. While there are plenty of meat options, vegetables are the star. Among the flora: grilled radicchio and romaine with bacon, avocado, peaches and Parmesan; grilled corn with kochukaru (crushed red chile pepper); roasted and grilled carrots; and radishes with butter, chiles and lemon. Nearly all the items on the menu are paired with one of five “mother sauces” that are explained on the aforementioned index card: brown (chiles, soy), green (garlic), red (chiles, garlic, onion), yellow (onion, soy) and rainbow (nuts, garlic, chiles).

Cocktails are Crazy, Again
The inventive Matthew Biancaniello, who also developed the drinks menu for POT, heads the cocktail program here. The produce theme makes its way to the bar, too, where you can order gin and fresh beet, watermelon or carrot juice. In a Food & Wine interview, Choi likened them to “spiked agua frescas.” There is a tomato and okra (!) cocktail with cachaca, zebra heirloom tomato, and lovage; the Pimp’s Cup combines rhubarb, shiso, cucumber and ginger. The drinks are served in the kind of plastic deli containers you usually cram potato salad into. You can say one thing for Choi’s new country club for the masses—it’s never condescending.