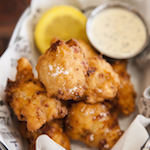 The food world has been buzzing about Michael Cimarusti and Donato Poto’s (Providence) newest project, Connie & Ted’s, for nearly a year. This week, their casual seafood restaurant, like a pearl among oysters, opened on busy Santa Monica Boulevard in West Hollywood.

Located on the lot that used to house The Silver Spoon coffee shop on Havenhurst and Santa Monica, the new space looks nothing like its old shell. Architects Douglas Pierson and Christopher Mercier have transformed the block into something modern and classy. The two principles of Fer Studio out of Inglewood designed a space that front of house maestro Donato Poto describes simply as transparent.

“Everything in this place is about transparency, from where the fish comes from, to the kitchen—which is completely open—to the interior.” Indeed, in walking around the restaurant, one can see everything else in the restaurant from any given position. And not surprisingly, there’s not a bad seat in the house. Even the patio, which faces Santa Monica Boulvevard, is tucked away thanks to clever architectural details such that it doesn’t feel like you’re dining on a busy street.

Walk the plank up to the entrance from the parking lot and you’ll see a long, curving bar that winds around to meet the open kitchen. This is maybe the most open kitchen of any restaurant in L.A. right now; it feels as though you could walk right into it, if it weren’t for a service counter, which divides the space and props up a tank of live lobsters.

For this project, Poto and Cimarusti partnered with Craig Nickoloff and Amy Spector-Nicoloff (Claim Jumper), to bring a modern sensibility to a rustic New England. By bringing on the Nicoloff’s Poto and Cimarusti signal that they’re looking to expand this concept. And since we’ve seen what Poto and Cimarusti can do with fine dining, we’re eager to try this more economical take on seafood. Could Connie & Ted’s turn into the next Claim Jumper, only tailored to the more refined tastes of today’s average city diner? The new restaurant already has a fan base, after all.

“The most exciting thing for me, today, on opening day, is thinking of all of our neighbors. Every day for the past several months I have neighbors coming up to the building to introduce themselves. Dozens and dozens of people, who are all so welcoming and warm and want us to succeed. I’m Italian, and it reminds me of being in Italy, where everyone is your cousin,” says Poto. Along with Cimarusti’s wife, Crisi Echierri, the trio have been busy crafting the menu and setting the scene. Though Cimarusti will be spending plenty of time in this kitchen, he’s left executive chef duties to Sam Baxter. Hoang Nguyen, who served as a captain and sommelier at Providence heads up the beverage program here. Laura Lindsay (1886, Providence) is running the cocktail program.

So how do you get a seat, besides standing in line in advance of opening each evening at 6 p.m.? Thank goodness there’s not ticket system here. “We’re taking reservations for exactly 50% of our tables,” explains Poto, “and the rest will be for walk-ins. Including the bar, patio, and small lounge, the restaurant seats about 145 people comfortably. Eventually, in a few weeks, the restaurant will open for lunch too, and be open seven days a week, from 11 a.m. until 11 p.m., and until midnight on Fridays and Saturdays.

As for the menu, Cimarusti has been testing and tweaking everything from vendors to sauces for months. Which is no surprise, given the level of detail that goes into his dishes at Providence. The menu reads like every great New England seafood restaurant gave up their most famous dish, and then Cimarusti got his grandparents (the Connie & Ted) to share all of their recipes. There’s a raw bar, that aforementioned live lobster tank, Jo’s Wicked Good Chowda, stuffies, crab cakes, oysters Rockefeller, lobster rolls, fish stews, steamers, fish and chips, and good lord, a menu of desserts that reads like a dream. It includes strawberry rhubarb pie, devil’s food cake, and house-made sherbert.

We did the math. The combined cost of everything on the menu is still less than a roundtrip ticket to New England. So, what are you waiting for, L.A.?

Decoding the Wine List: Sip This and Eat Oysters