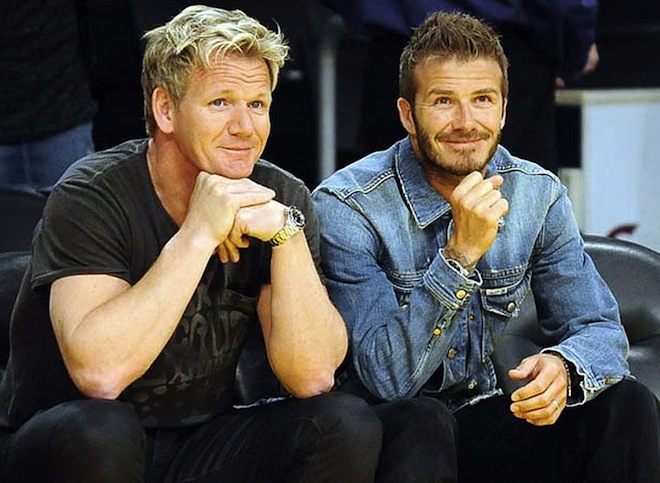 Yesterday, international news reports confirmed that soccer star David Beckham, who played with the L.A. Galaxy for several seasons, was going to retire. This reminded us of the rumors about David Beckham’s supposed partnership with “angry chef” Gordon Ramsay. Last year, Grub Street New York speculated that the pair would be opening a restaurant together (after Beckham’s retirement) in New York or London.

A few months ago, Zagat (and other sources) confirmed that the pair were working on a concept called Union Street Cafe in London. Though we don’t know too much about this new restaurant concept, we do know that Mr. Beckham and family like to dine out.

When he lived in L.A. during his tenure with the L.A. Galaxy, the man was a regular at Coffee Bean & Tea Leaf, according to multiple sources. He took his kids to Pinkberry. And famously, his wife once caused a fuss at Abbot Kinney hot spot, Gjelina. Needless to say, he has spent some time at Gordon Ramsey’s restaurants, and is friendly with the capricious chef.

Union Street Cafe, which is set to open in September of this year, has been described as a Mediterranean eatery located in South London between the Southwark tube station and the Tate Modern museum. Soccer fans (or, just Beckham fans) may be among the first to flock to the space, hoping to catch a glimpse of one of the owners, and that’s all well and fine since the restaurant is spread over two floors of a warehouse.

It sounds like a solid concept from someone who could have spun his celebrity into a whole new Hollywood story. And, perhaps it will be a comfortable way to retire a famous foot.