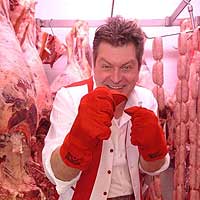 In Bill Buford’s delectable 2006 novel Heat, the author spends several months in Tuscany learning the art of butchery from the now renown Dario Cecchini. Famous as much for his exuberant personality and penchant for 14th-century epic poetry as for his flare with a knife, Cecchini has made a career out of being, well, Dario, appearing on shows like No Reservations with Anthony Bourdain and winning over our own Jonathan Gold in 2009. But none of this rockstardom has gotten in the way of his true passion: meat.

Both functions are in honor of the restaurant’s upcoming 40th Anniversary in December. If these are the kind of events we can expect over the next nine months, then color us excited.

The class plus the luncheon is $65 per person, with proceeds to benefit Meyer Children’s Hospital. The dinner is $125 per person ($155 with wine pairings) inclusive of tax and tip. Honest, we’d be surprised if this wasn’t already sold out, but just in case go ahead call for a spot. Like, now.