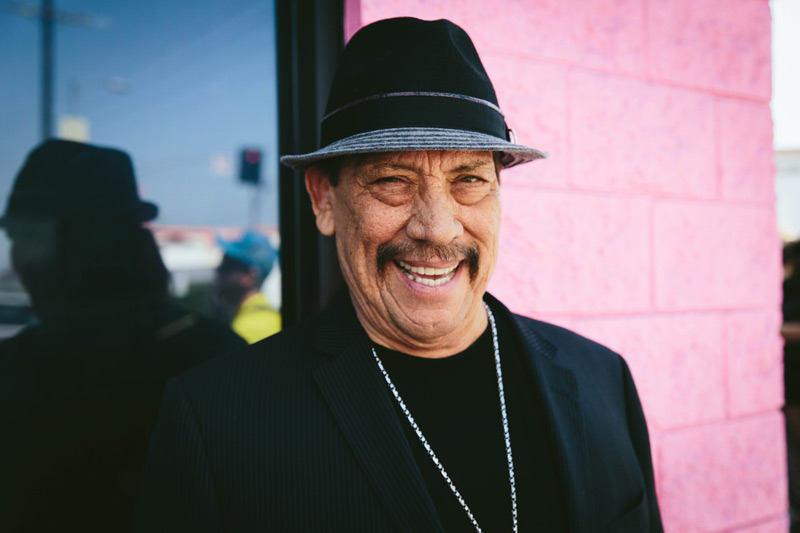 It’s National Donut Day, and the line at Trejo’s Donuts and Coffee on Highland and Santa Monica snakes across the parking lot. I ask the worker behind the counter if there’s a promotion to mark this sacred national holiday. She says no. The customers who notice Danny Trejo is here today seem surprised, like they didn’t know he’d be on the premises. I want to ask the worker, “Hi. Not to be rude, we all liked Desperado, but why are all these people really here?”

Celebrity restaurants come and go. Mostly, they seem to go. (Remember Beso? Madres? Nyla? Flava Flav’s Fried Chicken? It was in Iowa, but still. Never forget.) Los Angeles has given birth to some of the best restaurants in the world, but it’s also a restaurant graveyard, the site of scores of restaurant deaths. It takes some nerve to look at L.A. and say, “You know what this place needs? Another restaurant. And I, a celebrity, am just the person for the job.” But that’s exactly what Trejo has done, and not just one restaurant. In addition to Trejo’s Donuts and Coffee, there are two Trejo’s Cantinas (Hollywood and Pasadena), a Trejo’s Tacos (Mid-Wilshire), and more Trejo’s coming to USC and Silver Lake.

There’s a crowd waiting in line for donuts this morning because the guy from Desperado and Con Air and Spy Kids is in the food biz now, and the food is good.

Onscreen, Trejo often plays characters that inflict violence upon others. In person, he’s chill—about 80 percent more chill than is normal in a standard human being. His chillness actually makes you aware of how chill you aren’t, and it compels you to be more chill.

Trejo’s restaurants manifest this chill. The menu items are playfully named. (Low Rider Donut, anyone?) The Trejo’s Donuts where I’m interviewing Trejo, with its campy art, neon pink exterior, and pink employee uniforms, is more matcha than Machete. Where Jimmy Buffett’s Margaritaville goes all in on Buffett’s tequila-is-a-reasonable-breakfast-drink persona, the three Trejo’s I visited went for irony. Customers see touches of humor and art where someone selling a Planet Hollywood version of Danny Trejo would give them with leather vests and throwing knives. The actor’s smirking face is emblazoned outside each restaurant. Inside: the type of place you don’t feel silly ordering a Vegan Coco Loco donut. Maybe that’s why Trejo is smirking. “This is Danny’s inner beauty,” says Trejo’s business partner Jeff Georgino.

How chill is Trejo? He has given Georgino and fellow business partner Ash Shah permission to use the restaurants as a space to play with his image in a way that’s wry and humorous. “He’s humble in the sense that a lot of the things that we do are ironic,” says Georgino, while standing in front of a giant inflatable rainbow-sprinkle donut.

The Trejo team has a saying: Danny’s face will bring them in the door. It’s the food that keeps them coming back. Under this guiding principle, Trejo and his friends taste-test the menu. “If I don’t like it, it don’t hit the floor,” Trejo says, which is the closest he comes to uttering something negative during our conversation. Georgino and Shah spend a lot of time at the various Trejo’s locations, with Georgino sometimes jumping in to cook or wash dishes. “We didn’t get into this to open a restaurant. We got into this to start a business,” says Georgino.

Trejo comes to Mexican food through his L.A. roots. Georgino was born and raised here as well. Shah moved to Los Angeles from England. He roomed with Georgino at USC, and the two ate their way through the city’s tacos and burritos. The idea for a Trejo’s restaurant was conceived with Trejo on the set of Bad Ass 3: Bad Asses on the Bayou, which you probably have never heard of because, says Shah, “I made a bunch of movies. None of them really good.” He makes a point to add that Trejo was always good in their collaborations.

Instead of competing with the city’s beloved authentic street taco stands—like this one in Lincoln Heights—the guys decided on a chef-driven menu that offers a variety of vegan, gluten-free, and comfort food options, at a pay-a-tad-more-for-quality price point.

The chef overseeing this menu is 22-year-old Mason Royal, a Palisades High School grad who came to Trejo’s by way of Plan Check. His age is unusual only when viewed against a traditional backdrop.

The Trejo’s team prides itself on unorthodox hiring. So what if the executive chef is the age of a college senior? Trejo’s isn’t trying to be exactly like everywhere else. “I don’t mind people coming out of prison,” says Georgino, the son of an LAPD officer. “Everyone goes in for different reasons. People can change. Danny changed. I’ve had people ask me in job interviews, ‘You have no problem with piercings and tattoos?’ I’m like, ‘No, do you get a lot?’ They’re like, ‘Yeah.’ We don’t care about that.”

Chef Royal trained at the New School of Cooking and calls chef Ernesto Uchimura his mentor. He came to his love of food through his mother and grandmother, both Jewish, and their Sunday latkes and brisket. “It’s about cooking what people want to eat,” Royal says at the Trejo’s Cantina in Hollywood. “It’s not very froufrou. It’s not tweezers cuisine. It’s comfort food, and it brings people together.”

At Trejo’s Tacos on La Brea, I sampled the carnitas with grilled pineapple taco, the steak asada taco (with toasted pepita pesto and slaw), and the fried chicken taco (served in a lettuce cup with slaw, chipotle cream, and pico de gallo). I’m a taco expert insomuch as anyone who lives in L.A. for over a decade joyfully becomes one, and aside from the fried chicken making a mockery of the physics of the lettuce cups, everything was first-rate.

Anthony Bourdain, who visited Trejo’s Tacos for his show, told Los Angeles, “I found the food shockingly good.” This is probably a typical reaction. You go in with neutral expectations, because how good can a celebrity restaurant be? But the ingredients are quality, the bold flavors are actually bold, the vibe is fun, and the overall experience is pleasing.

I washed down my tacos with a Trejo’s brand cerveza, enjoying both the classic Mexican beer taste as well as the fact that the guy whose name is on the label has been sober for 49 years because this is America and why the hell not?

With Trejo’s aiming for a $100 million valuation and already receiving calls from investors, the company is looking to join the ranks of other local chain restaurants that carry bits of L.A.’s DNA beyond our city limits. Every customer buying a Trejo’s taco in Houston or Toronto or Dubai or wherever the company expands will unknowingly be purchasing a small taste of our culture along with their jackfruit tacos.

In many ways, the chain owes its rapid ascent to the city. Hundreds of people waited in line on the day Trejo’s Tacos opened last year because Trejo has banked decades of goodwill in Los Angeles. He’s an actor who has earned his status, working prolifically, and hitting it big later in life. His fan base ranges from grandmas to convicts. The fact that there is a Trejo celebrity image to sell to the public could only have happened after a long career working in Hollywood. Trejo volunteers locally for autistic causes and speaks to school kids as well.

Putting the first franchises in and around Hollywood set the tone for the design and the menu. In the case of the Cantina, a forgettable restaurant with bland food wasn’t going to cut it on the same block as Umami, Stout, and Big Wangs. “There’s a restaurant on every corner. You’re competing with some of the best restaurants in the world. The food has got to be great, not good,” Trejo says.

The biggest challenge Trejo’s will face, say restaurant industry experts, is balancing growth and control. The company launched its first few restaurants just a few miles apart so Georgino and Shah could be hands-on. Grow too quickly, and they will lose on quality. Keep too much control, and they won’t grow. “It’s the choice between being rich and being king,” says Noam Wasserman, founding director of USC Marshall’s Founder Central Initiative and author of The Founder’s Dilemma.

Trejo’s has managed to keep its standards high by training and employing more managers than it needs, so that it has experienced managers at both its opening and existing restaurants. “That’s the most difficult challenge—people,” said restaurant consultant Fred LeFranc. “You have to attract and retain highly-qualified managers, and they company must invest in training programs and culture.”

As Trejo’s peers outside L.A., it has some things going for it. It’s off to a good start in terms of quality and buzz, it has a celebrity attached to it who isn’t likely to embarrass himself and kill the brand, the celebrity is engaged with the company, the founders are looking ahead, and the company isn’t just relying on its restaurants for revenue. Trejo’s is a lifestyle brand that operates restaurants and also sells hot sauce, beer, coffee, and Trejo brand merchandise.

“Anything good is risky,” Trejo says. “I’m having so much fun with my life. I think if it stops being fun I’ll go fishing. This is a blast. I love meeting people. Every morning I wake up, and I say my prayers, and I ask God to let me sign every autograph and take every picture. What a blessing it is to make somebody’s day.”

With reporting from Marielle Wakim.

Joe Donatelli is the digital managing editor of Los Angeles magazine. He wrote The Story Behind the Most Inescapable Billboard in Los Angeles. Follow him on Twitter and Facebook.

RELATED: The Tao of Panda Express