Home Uncategorized Dance Like a Brazilian: Carnaval in L.A. 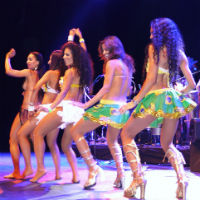 This weekend kicks off the Carnaval season here in Los Angeles, which will soon be celebrated across the globe—including in Colombia and Brazil, where the event reaches its grandest spectacle. Yes there will be sexy, statuesque samba dancers, music, and dazzling costumes, but let’s get real—this is your last chance to grub before the 40 days of lent (ahm, good Catholics).

On Saturday, February 22 feast on Colombian empanadas, tamales, and steak from the Llanos region at the 12th Annual Carnaval de Baranquilla in Downtown L.A. Once you’ve had the week to recover, it’s off for a taste of Brazil on March 2 at The Brazilian Carnaval World Cup 2014 at Club Nokia/L.A. Live from the people at Brazilian Nites Productions.

On the menu this year will be energizing açaí bowls from Ubatuba, savories like the ubiquitous coxinhas (chicken croquettes) and kibes (beef croquettes), caldinho de feijao (bean soup)—a staple of late night fare in Brazil—and escondidinho (yucca cream pie).  This is a big step up from last year’s offerings, which consisted of some pastries and Brazilian hot dogs.

The show is spectacular. It’s a non-stop parade of fine, feathered samba dancers, bands, capoeira artists undulating to a variety of the latest Brazilian music trends including funk carioca, samba, country—yes, Brazil has country music—axé, and forró. World cup is the theme of this year’s Carnaval celebration with our own Joany Macias and her L.A. Samba Dancers providing enough hip action to rock Maracana stadium, and a genuine Bloco World Cup 2014, or block party, led by Fransini Giraldo and Sambabody.

It’s two weekends of South American carnaval, and a chance to enjoy some regional Colombian and Brazilian eats with aguardiente and caipirinhas respectively. Work it off on the dance floor, or relax and let the samba dancers do all the work.

Eat Like a Brazilian for the World Cup Finals