Home Dining Chefs and Restaurateurs Dairy Diaries: Making a Business Out of Mac and Cheese 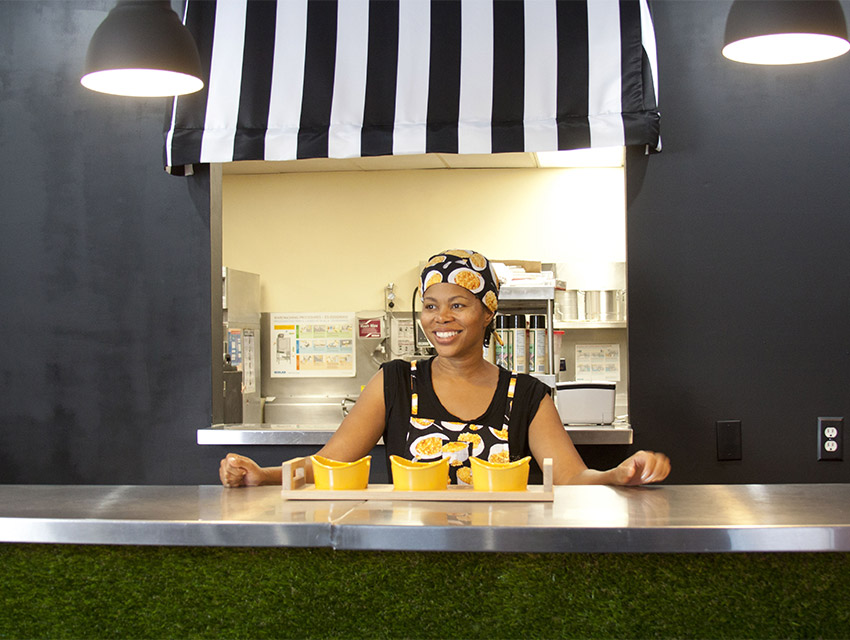 There’s just something about Kelly Chapman’s mac and cheese. That’s the conclusion Chapman herself came to after years of making it for office potlucks, family Thanksgiving dinners, and even a wake.

Although she cooked a variety of Southern dishes handed down via a strong matriarchal lineage—her grandmothers, aunt, mother, and stepmother all inspired her in the kitchen—people would always comment on her mac and cheese, she says. At work, it was always, “Who made the mac and cheese?” And at the wake in honor of her stepmother’s passing, the questions were still coming, which struck her. “I thought, this is a sad occasion and people are still asking about my mac and cheese?”

In truth mac and cheese was never far from Chapman’s mind, either. “Anywhere I went, I was always ordering mac and cheese,” she confesses. Her career in the corporate world, and as a singer, sent her around the world, and in all her travels, she never found an equivalent. As Chapman explains, she doesn’t use heavy cream in her recipes like most do. She relies mainly on cheese, plus a little egg, and spices for a more casserole-style approach to the dish. How cheesy? “Like I’m having a ‘mac-O’ and my eyes are rolling in the back of my head,” is how she demurely explains her dishes’ love affair with cheese.

How Chapman went from idea to iteration—she’s the proud owner of mac-O-licious in Valley Village, plus “the housekeeper, bookkeeper, server, and chef” of the restaurant and a catering arm—started with a move to Los Angeles in 2011. She came from her hometown of Cleveland, driven by a desire to be near friends and family, but also to be near the water. She also came with dreams to do something different. Once here, Chapman vowed to get out of corporate life and to come up with an exit strategy. So she did what any other budding culinary star with a strong recipe does in this city—she started a food truck. It was equal parts success and failure.

In just one month, she and her crew “started running around the streets of L.A.” While her trademark cheesy mac and cheese was winning hearts, late nights, equipment malfunctions, vehicle breakdowns, and accidents all convinced her to ditch the truck and move into catering and farmers markets (she has had stands everywhere from Malibu to Sherman Oaks to Miracle Mile). The lifestyle worked better, but she still wanted to open a real shop.

She even appeared on CNBC’s Restaurant Startup in 2014 in the hopes of attracting money for a brick-and-mortar space. That didn’t pan out. At that point, Chapman says she was ready to give up. “The next day, I was driving down the street and I saw a restaurant ‘for lease’ sign” in a perfect Valley Village spot. “I thought, ‘Wow, if this just isn’t divine providence.’ ”

Flash forward to September 23, 2015, when her restaurant, mac-O-licious, will be celebrating its one-year anniversary. It’s a sign that the mac and cheese that has propelled Chapman this far has a steady but growing number of fans. And if they come for anything, they come for the cheese.

“I’m not your typical chef who has been to cheese school and studied cheese from around the world,” Chapman says of her process. “A lot of this came to me from experimentation.” She uses a variety of types and brand of cheese in her different mac and cheeses (you’ll find everything from “Kelly Chapman’s Original Southern Mac” to her “5 Cheese Mac” to “Dreamy Creamy Mac” and even a “Box Mac”—yes, it comes from a box—on the menu).

A sharp cheese that can hold up to baking is critical to the right taste and texture for Chapman, and she likes to use naturally-aged Tillamook Sharp Cheddar, especially on “Wacky Wednesday”, when she experiments with different preparations.

Her “5 Cheese Mac” adds fontina, gruyere, asiago and parmesan to the standard cheddar. Chapman describes another of her dishes, the “Fried Mac Pops”, which can be stuffed with crab and bacon, as a “cheese explosion on the inside.” And on the outside, you can dip them in her Dreamy Creamy sauce.

It should come as no surprise that Chapman loves dairy. But what might surprise you is that she’s lactose intolerant—and yet she eats mac and cheese almost daily. Her secret is to eat just four ounces a day, eat it slowly, and stick to the highest quality milk products.

As for the future, Chapman wants to continue her philanthropic efforts, which include a scholarship fund in honor of her mother at the Cleveland Foundation, the continuation of the Kelly Chapman Ministries Mobile Pantry that helps feed low-income families in Cleveland, and a partnership with L.A. Family Housing to help feed the homeless.

And she is thinking bigger. Chapman hopes to open up additional locations in L.A. and has her sights set on getting a mac-O-licious line in grocery stores. She also has grand plans to “be in every airport and every sports arena across the country.”

Mac and cheese fans nationwide should cheer for that.

Dairy Dairies: The Science Behind Yogurt