Home Food & Drink This Is The Only Cuban Sandwich You Should Be Eating in L.A. 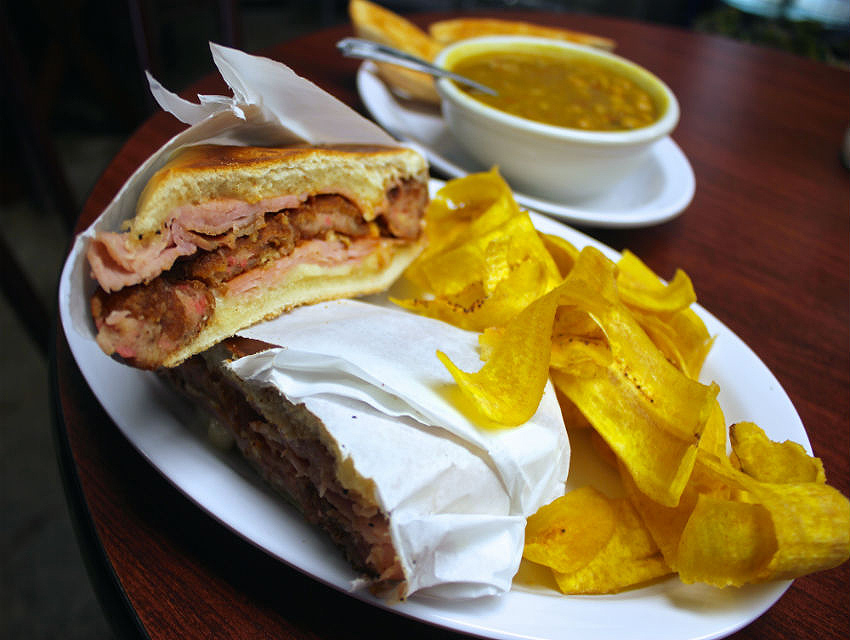 If you saw the 2014 movie Chef, you probably know about the Cubano. It was the pressed sandwich consisting of ham, melted cheese, pickles, and mustard that turned a tatted-up, apron-sporting Jon Favreau into a food truck phenomenon. The Cuban-American creation is required eating in Miami, and there are plenty of good examples of it here in L.A. But nothing—not even the version Favreau whipped up in real life with Roy Choi—comes close to the croqueta preparada served at Hawthorne’s Café Cuba and Cakes.

Picture this: A pressed Cuban roll stuffed with the usual ham, cheese, and the like, but with the added blast of golden, deep-fried nuggets of ham and cheese, or croquettes. The sandwich is basically a hybrid of two Cuban sandwiches: the one we know, and a blue-collar cafeteria staple in Cuba that fills small buns with finger-shaped croquetas. The menu at Café Cuba and Cakes includes all sorts of Cuban specialties, like a garlicky garbanzo stew, arroz con pollo, and pork ribs in a mild green sauce. But the croqueta preparada is why you’re here. No where else have I found such a porky explosion loaded with crisp sticks of ham and cheese dynamite. Nonstop flights from LAX to Havana are coming soon. Until then, this will more than do.

Where to Get a Philly Cheesesteak in L.A.

4 French Dip Sandwiches That Go Beyond Cole’s and Philippe