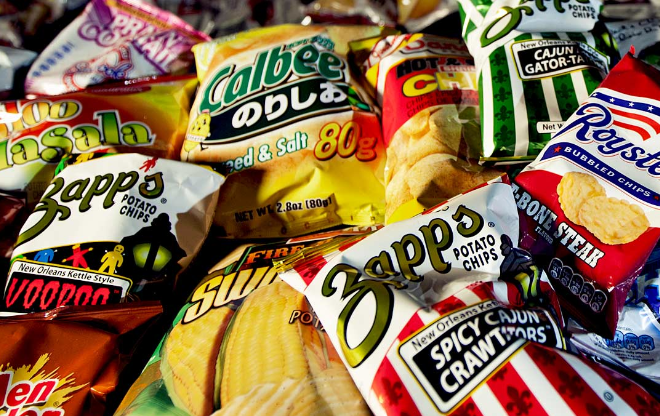 Sorry America, when it comes to global domination in potato chip technology, we’re eating the rest of the world’s sticky orange dust.

Ruffles and ridges? Meh. Try T-bone steak, Moroccan couscous, maple bacon, and hoisin duck. These are but a fistful of potent flavors featured in what is likely the first global potato chip pop-up shop  in L.A. at the IAM8BIT gallery in Echo Park.

The exhibit, which opened last Friday and runs until December 23, looks like a cross between art installation and 7-11 display. It features over 50 varieties of spudliness flown in from independent manufacturers all over the globe, including India, Japan, Australia, Greece, and the crisp capital, the United Kingdom. The pop-up also brought in a few regional US brands that enjoy a cult following, like Louisiana-based Zapps. The bags on the wall are for sale: five small bags for $20,  large bag for $5. On opening night, several flavors had already sold out, with Maple Bacon from Canada and Aloo Masala from India going first.

It may seem odd for an art gallery to curate the kettle-cooked, but curator Jon Gibson is fascinated by the seemingly infinite chip varietals and how they reflect a populist palette. “We explore subcultures,” Gibson says, “and potato chips are a subculture.”  Let the cross-continental crisp obsession begin!