Home Dining Chefs and Restaurateurs Classy Crudités Are Making a Comeback at These L.A. Restaurants 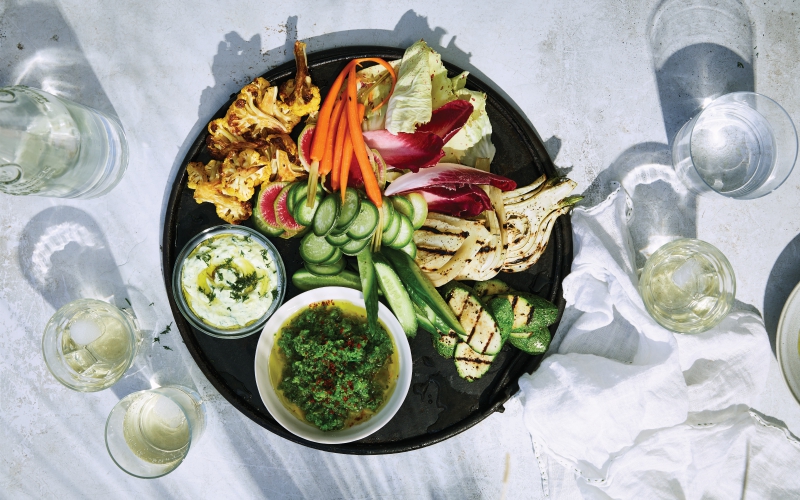 For most of us, the crudité platter, that health-minded staple of ’80s house parties and backyard barbecues, conjures images of carrots and celery sticks scattered around a tub of ranch. Yet in the right hands, those crisp vegetables (the word “crudité” means “rawness” in French) can become a dip-friendly vehicle for showcasing L.A.’s most impeccable produce.

In the Lobby restaurant at the NoMad hotel in DTLA, young carrots, pink radishes, and fennel slices jut from a bowl of crushed ice. And the pretty plates at P.Y.T., Josef Centeno’s veggie-forward spot downtown, might feature an array of fruits like kumquats and mandarins perfectly interspersed with kale, spigarello, and sprouting broccoli.

Despite the colorful panache, the produce in question is often prepared with little adulteration: wash, cut, and serve. But sometimes appearance belies technique. At Chinatown’s Majordomo, David Chang lends vibrancy to his Bounty Bowl by spraying raw greens with kelp-seasoned water to make them glisten. One thing everyone agrees on: Freshness is paramount.

“With a dish this simple,it’s essential fort he product to be pristine,” says Chris Flint, executive chef at the NoMad. “We source beautiful ingredients in New York for our version there, but here we’re able to feature different variations because of the climate.”

If there’s a trick to making diners comfortable with shelling out $15 for a spread of beautiful rabbit food, it might involve conveying a sense of place, or at least channeling the agricultural gusto that defines the Golden State.

“California is like Eden,” says Fiffer. “We have a fierce appreciation for the abundance of the farmers’ market. You don’t have access to this kind of produce in other parts of the country.”

Of course, there might be another explanation for crudités’ renewed appeal. Who doesn’t love a little finger food, even at the fanciest of dining rooms? “When we opened Ledlow more than three years ago, we served it as my take on the classic James Beard version,” says Centeno. “A crudité platter says ‘party.’ We just wanted to bring more to the party.”

RELATED: How to Eat and Drink Around the Clock at NoMad Hotel