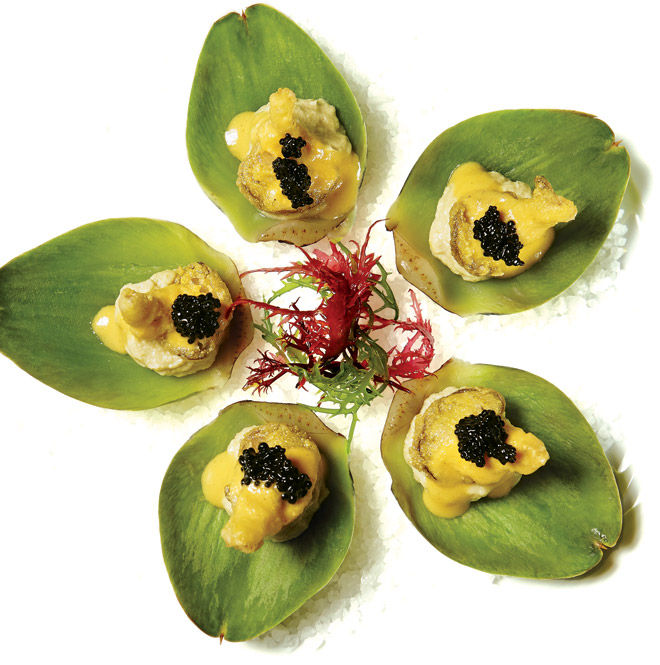 Crossroads is a small-plates Mediterranean restaurant with a hopping bar scene. Sweet baby Jesus, you’ve never heard such groundbreaking stuff! Before you turn the page, though, consider that from the moment you begin your meal with, say, a cream of fava and English pea soup until your final mouthful of the silky cappuccino ice cream at night’s end, not a single gram of animal-derived sustenance will cross your lips. And that includes honey. Vegan restaurants (the management at Crossroads prefers to call the food “plant based”) tend to conjure a whiff of sanctimony at least as strong as that of the wheatgrass you expect to be going through the juicer.

But Crossroads is all about repositioning. With industrial chandeliers framed by wood beams in a room filled with tufted banquettes and white tablecloths, the interior, by Studio Collective, radiates ample funding in a contemporary old-fashioned kind of way. An original Toulouse-Lautrec lithograph of a coquette laughing on the lap of a delighted clubman hangs in the private dining room. There are no obvious cues on the walls or mantras on the menu; this is a restaurant, not a soapbox or house of worship, unless you count the evening when Messrs. McCartney and Jagger shared a table a few months back.

The place certainly skews toward celebrity. Chef de cuisine Tal Ronnen, who has written a New York Times best-selling cookbook, met executive chef Scot Jones when they were brought together a few years ago to plan a restaurant in Akron for the Pretenders’ Chrissie Hynde. More recently Ronnen catered Ellen and Portia’s wedding; he’s launching a series of LYFE Kitchen cafés with Art Smith, Oprah’s former chef (Ronnen oversaw her 21-day cleanse); and he’s helping ease casino mogul Steve Wynn’s Vegas properties into the vegan world, too. Blink-182 drummer Travis Barker and real estate man-about-town Steve Bing are investors at the Melrose spot. Ellen herself sent out an early tweet about how fabulous the restaurant is.

There’s plenty to praise about the food. Filled with almond cheese, the tortelloni sit atop a parsley and frisée salad, as exquisitely folded as a perfumed billet-doux. The finely chopped hearts of palm that provide the meat of the “crab” cakes wield a bona fide hint of Old Bay seasoning, while the pan-seared exterior falls apart at the touch of a tine. OK, using an egg would help keep the thick ribbons of pappardelle from becoming mushy, but a Bolognese sauce made with wheat protein Italian sausage that’s popping with fennel seed (and Chef Jones’s marinara) is just the thing to illuminate the fruity angles of a $39 bottle of Hofstatter Lagrein from the Tyrol region in northern Italy.

Born in israel, raised in New York, Ronnen tries to stay true to the Mediterranean even with the inevitable meat analogues he uses. Since soybeans don’t grow in that latitude, you won’t encounter tofu or tempeh, the Indonesian version of the curd, among the offerings. So for his “scaloppine,” he utilizes Gardein, a blend of grains that has the poundable quality of veal (Ronnen was once a spokesperson for the paste). Seared before being finished with a marsala sauce and glazed morels, it has the old-school comforts and none of the ethical baggage of the original. He makes a fantastic milanese with it as well, the breaded crust a golden counterpoint to the arugula, pea tendril, and fresh corn salad that garnishes it. Almond cheese ricotta in the wood-fired lasagna adds a lushness to the bubbling skillet, developing a golden brown crust that’s every bit as satisfying as a full-throttle nonna version.

Ronnen has a masterful way of capturing tradition untraditionally. Chopped salad, another retro touchstone, is a completely modern rendition: a delicate jumble of pea tendrils, celery leaf, and watermelon radish bolstered with the lightest mustard grain vinaigrette. In fact, losing the ribbons of pepperoni you might find in the La Scala version actually heightens the effect. Like half of the city’s chefs, Ronnen may be a tad too taken with kale—substituting it for spinach in the crisp spanakopita is a transparently “healthful” modification—but that’s no reason not to love the chiffonade salad he makes with it. Composed with tender blanched leaves, it’s lent sweetness with currants and herbal complexity with lemon-thyme vinaigrette.

Both salads, however, made me wish that the kitchen did more with raw ingredients and, ironically enough, with vegetables. While Crossroads is a welcome newcomer, shedding a slew of clichés with its breezy elegance, it does underscore the conflicted relationship veganism has with, of all things, the plant kingdom. Could it be that the strictures and watchfulness the lifestyle requires (the Uinta Baba lager beer here is filtered, of course, without the usual fish-derived isinglass) leave it wary of passion? A cook can be single-minded about only so much. There is none of that dialogue between chef and farmers’ market you get at, for instance, Tar & Roses, a restaurant that despite its serious jones for heritage pork, turns out a magnificent bowl of wood-roasted English pea shells that have been drizzled with good olive oil and sprinkled with Maldon sea salt. Sure, leeks and fava beans abound at Crossroads, but they’re invariably whirled into a bisque with cashew cream or pureed for a dip or offered as a schmear. That’s a long way from sensing, as you do at the best produce-driven restaurants, this is the bounty of soil and farmers (none is mentioned on the menu) brought to the table.

Curiously, dry legumes, a vegan staple, can also lack inspiration here. Picking over spiced chickpeas in a sauce of oven-dried tomatoes, I’ve wondered whether the entire thing was oven dried. The lentils that go into what’s termed a “cassoulet” taste as if they’ve been cooked with no liquid—a serious liability with ingredients for which soupiness, or at least the suggestion of brothy stove-top origins, is essential. The lentils make a better showing mixed with millet in the flatbread, which, chewy and still warm from the pan, packs a delicious immediacy. You can tear some off and swipe it into the ramekin of leek pâté or cherrywood-smoked white bean hummus.Ronnen handles quinoa just right, presenting the Peruvian staple in a moist mound ringed by the ubiquitous favas and a few quartered artichoke hearts. Even better are the steamed artichoke leaves he uses as the base for “oysters.” A play on bivalves au gratin, they get their meaty texture from a dollop of artichoke puree crowned with crisped oyster mushrooms, their richness from a yellow tomato béarnaise, and their marine kick from kelp “caviar”—crunchy, salty beads.

Those faux fish eggs sort of crystallize the issue that has divided vegetarians since the first veggie burger was tossed onto the grill: If the point of going meat free is to be free of meat and all that goes along with it, why pretend? As for the secondary matter of how healthful such heavily processed foods can be, Ronnen isn’t buying it. “These are blends of grains to which very little is done,” he tells me over the phone with a mix of humor and exasperation. “It’s not Oscar Mayer lunch meat.”

Me? I split the difference. I find the whole “denial, what denial?” argument tired. The vegan movement is no longer at such a nascent (oops, I almost said “embryonic”) stage that it needs to prove it can be satisfying. We get it: This isn’t about deprivation. But I’m not about to fault a good dish simply because it’s got an ersatz ingredient or is mimicking a nonvegan standard. Case in point: Pastry chef Serafina Magnussen has worked with Ronnen since she was a student at Pasadena’s Le Cordon Bleu, and she has so internalized the principles of vegan cooking that time and again you’re left wondering, How did she do it? Vegan ricotta from Ronnen’s cheese operation, Kite Hill (far better than the mousselike Camembert), is freighted with lime zest before filling out marsala-scented cannoli shells. The ends are particularly yummy, since they’re dunked in candied Kalamata olives that look like chocolate nibs. Her version of vanilla panna cotta, glistening with a strawberry-rhubarb puree, is as rich as the finest crème brûlée.

Needless to say, there is no dairy in it, and for the nonvegans who make up the majority of the customers, the pristine flavors persuasively highlight the sensuous appeal of a more principled way of eating. Because for all its bucolic lyricism, much of today’s produce-driven cooking is finished with butter. Lots of it. Visiting Crossroads repeatedly turns out to be a bit of a cleanse for someone who makes a living dining out. I haven’t woken up in the middle of the night convinced my body needs to be detoxified (I know—TMI), and I’ve been surprised at how easily I could forgo ingredients I would have thought were keepers. I’m not ready to give up beef, but I guess you could say Crossroads has made me a more enlightened nonconvert. When the waitress sets down my risotto-stuffed banana pepper with a honking steak knife, I’m even able to recognize the gesture for what it is: vegan humor.

Reservations: Required in the dining room; open seating at bar