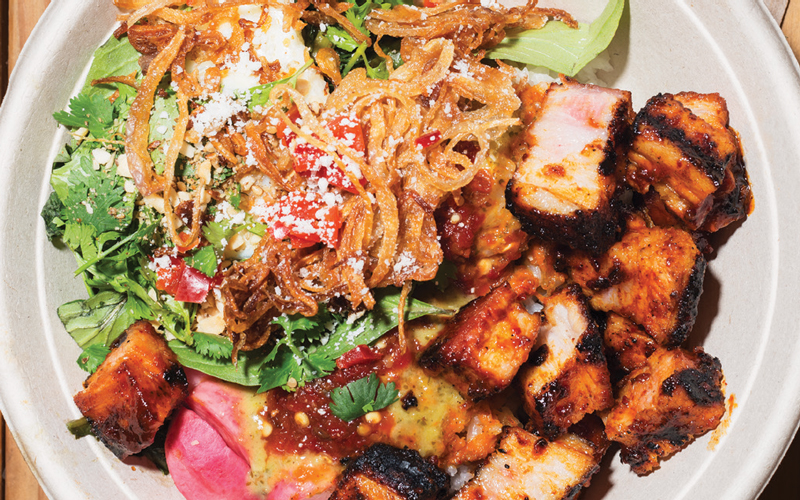 For a long time in the States, a lot of Euro-descended palates didn’t cotton to funk or pepper-induced heat, just as American eyes didn’t much appreciate dishes that looked unfamiliar. Stomach lining? Pig’s ears? These were the province of “ethnic” cuisine, a term that seems outdated but for which synonyms are tough to find. So immigrants who wanted to introduce others to their food—especially restaurant owners who hoped to attract as many customers as possible—would accommodate, creating a whole new genre of California ethnic cooking. Their restaurants still offered a peek into other cultures, but a TV version of them. Starting in the 1980s, more ambitious chefs might try to be honest about the hybridizing when they came  up with fusion cuisine (itself an outdated term), but even when Wolfgang Puck was giving dumplings a French twist at Chinois on Main, there was always the sense that rather than getting the best of both worlds, you were tasting one world’s attempt to upgrade another.

Some might see it as bastardization even when chefs strategically borrow, but cultures have been cross-pollinating in the kitchen forever. We wouldn’t have dishes like laksa, that spicy Asian soup, if Arab traders hadn’t introduced pasta to the Malay Peninsula around the 13th century. The version Bryant Ng makes at Cassia,  in which he stretches out ground lemongrass and chiles with shrimp broth and coconut milk, wasn’t originally part of any canon. It came about when Malaysian locals simply added what they had growing nearby. For that matter, we wouldn’t have things like Kris Yenbamroong’s Strip Club Fried Rice—hot dog slices and all. Locals in Thailand created a variant of the dish after sampling some of the fare that arrived with U.S. servicemen way back. What Yenbamroong offered until recently at Night + Market Song was authentic in its own way, just not deeply traditional like the chile-laden gaeng pa nok saap hot pot he serves; there’s not a “mild” version available because to experience the true flavor profile of the dish, you can’t stint on the heat. Instead you temper it with the sticky rice stashed in a pleated-grass container. As the son of parents whose own Americanized Thai restaurant, Talesai, became an institution, Yenbamroong isn’t into compromise; he’s into exploration.

RELATED: The Irresistible Draw of Assimilation

That’s what is so remarkable about the generation of chefs he’s part of. The children of immigrants, they are crafting food that is true to its roots yet open to the other cultures that swirl around L.A. County. You can enjoy the references—often nostalgic—as a bonus or simply go for the flavor. Especially when it’s dusted with togarashi, there’s a sushi-like element to the precisely sliced hamachi Wes Avila lays over a tostada at Guerrilla Tacos, and the way Ray Garcia substitutes cannellini beans for pintos at B.S. Taqueria establishes a link between the comforts of rice and beans and those of a simmered Tuscan ribollita. At her Filipino-inflected weekend pop-up, Isa Fabro Pastries, Fabro fashions an “isamada” that takes traditional sweet, cheesy ensaymada rolls—a product of Spain that was adopted in the Philippines—and works in ube, the purple yam paste that’s the cornerstone of a halo halo, the Filipino shaved ice sundae.

Anybody who has sat on one of Chego’s high stools eating a Roy Choi mash-up  of Korean, Mexican, Chinese, and American cooking—a kimchi Spam bowl with a scrambled egg, a side of street-style grilled corn, say, and a hip-hop soundtrack—knows how distinctly L.A. this dialogue is. Across the concourse at the same Chinatown mall is the minimalist Unit 120, an incubator Alvin Cailan has created to reposition the food of the Philippines. (Fabro bakes her ensaymadas there.) Cailan grew up in Pico Rivera and worked at Portland’s Castagna, at Spago, and at the opening of David LeFevre’s M.B. Post before launching Grand Central Market’s Eggslut counter. He’s set out to honor the service of postwar navy cooks (“a lot of them were Filipino,” Cailan says) who didn’t get to display their multilayered heritage beyond simmering the occasional chicken adobo special in vinegar and 7Up. The tight menu Cailan has drawn up for his popular venture is built around the food you might find in the market stalls of Manila or Davao City, with pinpoint moments in which he chooses to adapt. The fall-apart pork shoulder bears the dark char of sidewalk coals, but he’s not above rendering the traditional oxtail-and-peanut kare-kare as a vegetarian lentil stew. He’s young and American, and he knows how that update will draw folks. Instead of a concession, it’s enlarging the tent.