Home Uncategorized Cracklin-sanity: Rinds Are All the Rage in 2013 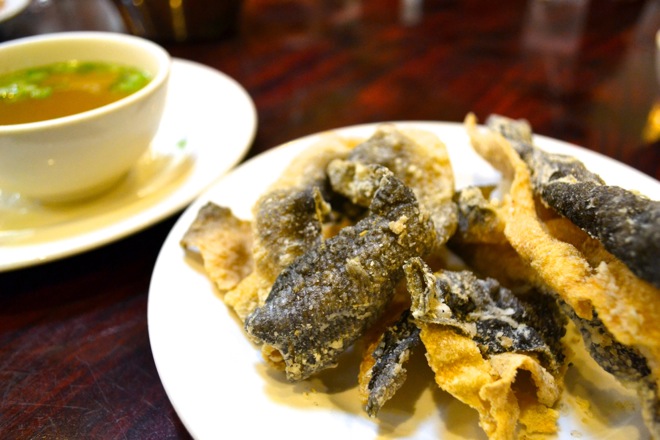 Predicting food trends has gone as far back as Nostradamus foretelling the demise of Twinkies. Looking into my culinary crystal ball, I spy an under-the-radar food that appears to be trending: skin. Fried skin. Not the Malibu or Jersey Shore brand of crispy, tanning salon skin, this is edible skin that I’m saying is deliciously “in” for 2013. And we’re not just talking pork rinds anymore.

Recently, Sam Woo BBQ—the Hong Kong-style restaurant in Van Nuys—recently fried up batches and batches of fragrant salmon skin for sale. Their salty crunchy strips of curled salmon sheath, however, are mis-paired with a chicken broth with chopped green onions. The soup is for dipping the salmon skin which doesn’t enhance the skin in anyway. Texturally, Sam Woo’s salmon skin is crisp like a thick-cut potato chip and, in flavor, tastes very much like a pork chicharron. The best thing about this rind is that you get the goodness of pork skin and the benefit of eating salmon skin, at least I’d like to think so.

Toto’s Seafood Grill in Panorama City has a bestseller called chicharong manok (aka fried chicken skin) that’s simply battered with flour, salt, and pepper, and served with a vinegar dipping sauce. Although very addictive, this fried chicken skin is quite greasy and may unsettle your stomach. Snacking moderation and dipping in the vinegar are key.

But it’s not just the Asian joints obviously that are in with skin. Chef Brandon Boudet at the re-imagined Tom Bergin’s Tavern serves up fried spicy chicken skin with Cashel Blue cheese sauce. In Culver City, I surprised Ford’s Filling Station chef Benjamin Ford with beaver tail as a secret ingredient for the inaugural episode of my new show with Valentino Herrera on YouTube called Kamikaze Kitchen. Ford smokes the tail, removes the skin, and thinly slices it, transforming the epidermis into tiny bits of beaver tail cracklins. Will we be seeing it on your menu soon, Ben?

So what is it that makes skin so irresistible? Maybe it’s the succulent, melty fat just under the delicate crisp skin. Maybe it’s the airiness and intoxicating lightness that is fried surface ectoderm. And though beauty may be skin deep as some argue, it can be said that, with cracklin at least, the goodness is right on the surface.