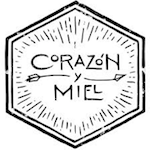 I first met chef Eduardo Ruiz—who worked the line at Animal on Fairfax for three years—when he was staging last summer at chef Diego Hernandez’s Corazon de Tierra in the Valle de Guadalupe, Baja California. We were at an event that featured Mexico’s top chef Enrique Olvera and a few other heavy hitters.

Just seven months later, on March 2, 2013, Ruiz opened Corazon y Miel with partners Travis Hoffacker and Robin Chopra. What started as a small catering operation soon spilled into what is now the dining room of a full restaurant.

While it’s only been open for a few months, there are already some misconceptions about Ruiz and Corazon y Miel. Ruiz, who is of Mexican and Salvadoran heritage, was born in the U.S. But his is not a Mexican or Salvadoran restaurant, nor is it Mexidoran fusion. It’s 100% Pan-Latin cuisine, filtered through Ruiz’s unique cultural and professional experience. “People have been trying to put a label on it, but this is just our thing,” says Ruiz.

Ruiz plays with the dishes of his childhood, riffing on them like a norteño band might make an accordion and a swinging polka their own. Pan con chompipe, a two-pound turkey leg sandwich, is the product of youthful envy. Typically, that hefty leg is given to the oldest male during the holidays as a prize. Ruiz pays tribute to this tradition, but has stripped away the conventional accompaniments of watercress and wet, pickled curtido (coleslaw); he’s substituted capers and a fresh, crisp slaw. These improvisations are consistent throughout the menu at Corazon y Miel. They’re noticable in way the chef has layered his wild boar chilaquiles as well as in the strength of his asado negro.

Ruiz and his partners are doing something no one in L.A. has done—they’re bringing sophisticated and affordable Latin pub food to a city that is only familiar with more traditional Latin-American restaurants.

U.S. born Latinos and pochos have been cooking in the best kitchens in Los Angeles for decades. Soon, they will be striking out on their own like Ruiz. And this is the future of Latin Cuisine in L.A.