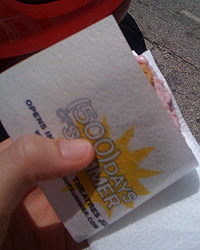 It’s been quite the food truck week here at the Wilshire Boulevard LAMAG HQ. First the Green Truck, then Kogi, and today Coolhaus: the loosely architecture-inspired ice cream sandwich company. My scoop of strawberry on two oatmeal cookies hit just the right spot on this steamy day. What didn’t? Their new “edible wrapper” printed with an advertisement for the romantic comedy 500 Days of Summer, hitting theaters Friday. It may be edible, but don’t, for god’s sake, eat that thing. It gets all over your hands, and our trusty intern Carolyn (below) sampled a corner and described it as “sorta like Styrofoam…and seaweed.” I concur. Also, I’m not sure how I feel about my food being used as a mini, munchable billboard. What’s next? Langer’s pastrami slices emblazoned with the Nike Swoosh?

I wonder if Kogi has been approached for such a thing. Surely, considering the fact I waited over an hour on Tuesday for three shortrib tacos, this several months after the Kogi craze began, I imagine they could eek out a six-figure sponsorship, easy. Let’s just hope it doesn’t involve some odd corn based tortilla-like product.