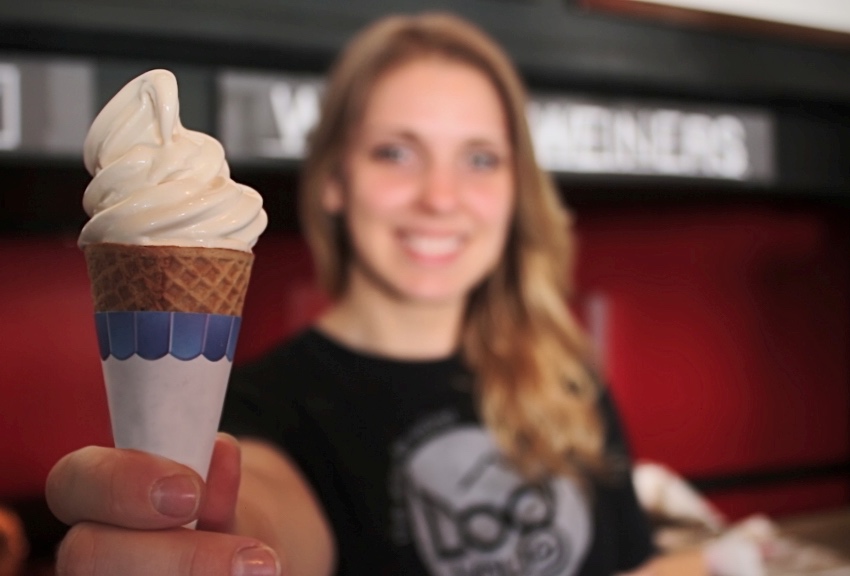 When the temps are high, Fosselman’s is a mad house. On any given weekend, sweaty folks from all over L.A. flock to the old-fashioned Alhambra ice cream parlor for classic scoops (we love the Cherry Vanilla), cones that look like clowns, sundaes, and milkshakes. Now, they can also get soft serve!

That’s right, after almost 100 years in business, Fosselman’s is finally making that frosty, machine-dispensed favorite. The project is a collaboration with Pasadena-based Dog Haus, which means it will be available at all of their locations, in addition to Fosselman’s. The gourmet hot dog purveyor will also be selling the ice cream maker’s famous milkshakes; vanilla, salty caramel and dutch chocolate flavors are available.

“As a Pasadena-based restaurant, we’ve always had a deep respect for local businesses in our community like Fosselman’s that are as committed to quality as we are at Dog Haus,” said Dog Haus partner Hagop Giragossian in a press release, adding that the company has been scooping Fosselman’s ice cream at their original location since it opened. Giragossian says they’re excited to be bringing the San Gabriel Valley favorite to a wider audience as they continue to expand throughout California and beyond.

And why did Fosselman’s decide to make a soft serve after all these years? John Fosselman, the third-generation co-owner of the shop admits they had to work past some reservations.

“On the West Coast, we think of soft serve as frozen yogurt, or very low fat ice milk—neither of which appealed to us to make,” says Fosselman. “But [Dog Haus’ owners] Hagop, Andre, and Quasim are youthful, and their enthusiasm for what they’re building with Dog Haus is infectious.  They inspired me to find a way to bring Fosselman’s quality to soft serve ice cream—clean taste, premium ingredients, amazing flavor, and high butterfat, just like our traditional ice cream.  And that’s just what we did.”