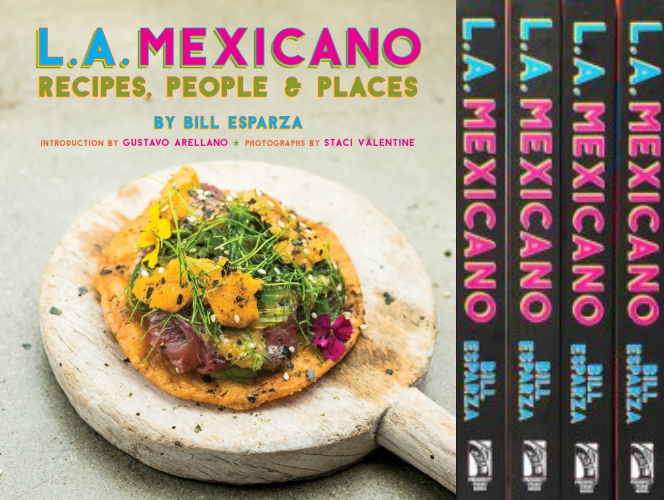 It was a banner year for Los Angeles cookbooks.

The above titles are all fantastic and compelling reads to be sure (note: as the co-author of Night + Market, I might be slightly biased about that one) however, there was one tome in particular that felt not only relevant to the city’s cultural canon, but urgently overdue: Bill Esparza’s L.A. Mexicano: Recipes, People & Places, a collection of stories and profiles chronicling Mexican food culture across Los Angeles.

It’s worth mentioning that Esparza, an L.A.-based food writer and media consultant, won a 2016 James Beard Foundation Award alongside former Los Angeles food editor Lesley Bargar Suter for their coverage of L.A.’s taco scene in this very magazine, although we can hardly claim him as this magazine’s own. He’s spent more than a decade covering the city’s Latin-American food scene on his blog as well for outlets like Eater L.A., KCRW’s Good Food, and CNN.

The idea for L.A. Mexicano, which in some ways is a culmination of the type of coverage Esparza has been doing for years, came from Prospect Park Books editor Colleen Dunn Bates, who had long wanted to publish a cookbook detailing the dynamic foodways of Mexican cooking in Los Angeles. Filled with 40 profiles of chefs, bakers, restaurateurs, street vendors, and other culinary artisans, the book offers insight that spans generations. Many names you might recognize—Ray Garcia, Rocio Camacho, Carlos Salgado—but even more fascinating are interviews (and recipes) from the families behind such civic institutions as Cielito Lindo on Olvera Street (open since 1934), El Tepeyac Café, and Casa Vega.

“I knew that I really wanted to represent all Mexican cuisine in L.A.,” Esparza tells me over agua frescas at La Monarca in Hollywood (the bakery chain is featured in the book). “A lot of the people in L.A Mexicano had never really been written about before, even though they’d had a huge impact on the city’s Mexican food scene. I wanted to include some of the usual suspects, too, of course, but it was important to uncover a few stories that had been lost, or ones that hadn’t been told yet. Those were the important stories that were happening in the Latino community.”

Though the book is far from definitive—40 entries doesn’t even scratch the surface, Esparza admits—it’s an earnest attempt to trace how the diverse world of Mexican food evolved into what we experience today. “You look at, ‘why did all these regional food trends start to happen, how did Oaxacan food spread in Los Angeles?'” says Esparza. “You can trace back when products from Oaxaca started arriving in Los Angeles in the early ’90s to when some of the early Oaxacan restaurants opened and when those foods started showing up in markets and minimarts.”

As Esparza tells it, there’s no debate that we live in the richest Mexican culinary enclave outside of Mexico. “Where L.A. stands out most is ingredients. It’s the gateway city. Any thing we can’t get here, we’re are able to bring over the border,” he says. “A place like Mercado Olympic has a bigger selection of chiles than most places in Mexico. There are serving the Oaxacan community, the community from Puebla, from Jalisco, from Guerrero, plus general chiles that you’d fine throughout Mexico. They’re able to bring in such a wide range of products because there is a demand for it.”

Another important aspect of L.A. Mexicano is that it demolishes the idea of regional Mexican cooking as a somewhat recent phenomenon in Los Angeles, revealing instead a nuanced ethnographic saga often obscured by the city’s long and pervasive history of white-washing, appropriating, and otherwise diminishing the importance of Mexican-Americans in shaping Southern California food culture.

“When El Tepeyac [in Boyle Heights] opened in the 1950s, they were doing crazy things with burritos,” Esparza explains. “There’s a very strong theory that Tepeyac was where wet burritos originated from, as well as the Mission-style burrito. The Mexican community in California knew about these places, and when burrito places in San Francisco opened in the ’60s, El Tepeyac had already been open for 10 years. So you saw this style of cooking emerging from East L.A. and Boyle Heights that formed what most Americas knew as Mexican food. The combo plate with rice beans started out on Olvera Street, and tourists from all over would come to Olvera Street to eat because that was only place in Los Angeles that was serving Mexican food and calling it Mexican food. Everyone else in town it would be labeled  it “Spanish” food, unless you made a trip out to the barrios.”

Carnitas El Momo, a food truck run by  Romulo “Momo” Acosta known for serving some of the best carnitas in L.A., has been around in one form or another since the 1980s, when it operated out of a downtown sweatshop. La Flor de Yucatan, a bakery and storefront near USC serving cochinita pibil (pork slow roasted in banana leaves) and papadzules (hard-boiled egg tacos), first opened in 1971. “Even back then you had this regional Mexican scene that was emerging, but nobody was covering it or documenting it,” Esparza says, “at least until food writers like Barbara Hansen and Jonathan Gold started writing about those kinds of places in the ’80s and ’90s.”

A blend of past, present, and future (including an in-depth look at the rising Alta California culinary movement currently taking the city by storm), L.A. Mexicano is a welcome deep dive into the people and places that have defined our city’s lasting love affair with tacos, burritos, tamales, and countless other dishes. The fact that you can also cook the iconic recipes from those same storied establishments (like Mariscos Jalisco’s fiery aguachile rojo) is icing on the cake.