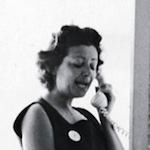 Hazan was known for simplifying recipes down to their essentials and for emphasizing the importance of good ingredients long before farm-to-table became chic.

Though she never achieved the star power of chefs like Mario Batali, Hazan’s influence was recently reawakened in the past decade thanks to the popularity of her recipes on cooking blogs. One of her most famous sauces, a simple mixture of tomatoes, butter, onion, and salt, has been reproduced online tens of thousands of times. Its simplicity has been called ingenious and “the most famous sauce on the internet.”

“I didn’t pay attention to Julia Child like everyone else said they did,” Mario Batali recounted to the Times. “I paid attention to Marcella Hazan.”

She is survived by her husband and cookbook translator, Victor, their son, and two grandchildren.

Nancy Silverton Is Eyeing Some Major Moves and Expansions

Eataly Is So Hot It’s Measuring Wait Times in Peppers